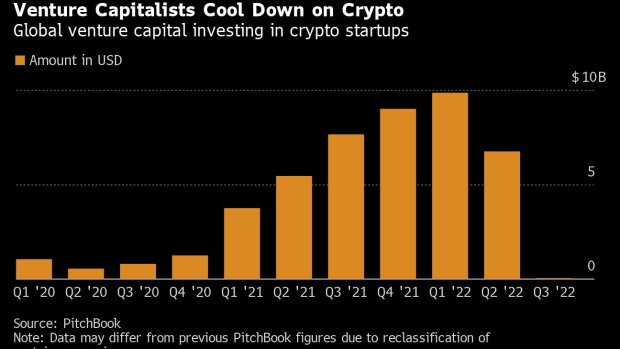 India is a fast-growing market for crypto trading, something its government isn’t too keen about. , Photographer: Erhan Demirtas/Bloomberg

(Bloomberg) -- Crypto startups finally felt the effects of an economic storm that has been cooling digital currencies, public stocks and venture capital all year. Funding to private crypto companies in the second quarter fell to its lowest level in a year, according to data from the research firm PitchBook.

The hype around crypto startups made the sector seem briefly immune to the economic turmoil. It set a record of $9.85 billion in venture funds raised in the first quarter. That was, it turns out, only a factor of how long it takes for venture capital deals to finalize. “Even though the crypto market started slowing down in November, December, those deals were already in discussion, so they closed in the first quarter,” said Robert Le, fintech analyst at PitchBook.

The second quarter gives a truer glimpse at the gloominess. Venture capitalists invested $6.76 billion into crypto companies in the period that ended in June, a 31% decline from the previous quarter, PitchBook said. The crypto industry now mirrors the sluggish activity among tech and venture capital investors. “Everyone is really hesitant on closing deals right now,” Le said.

There are many examples of trouble in the crypto industry. The collapse of the TerraUSD stablecoin, serious financial troubles  at crypto lenders like Celsius and Babel Finance and waves of layoffs at Coinbase Global Inc., Gemini Trust Co. and Crypto.com have all contributed to the uncertainty.

Pakman is advising companies he backs to retain enough cash on hand to endure two years’ worth of hardship. “This is going to be a long-term down market,” he said. “It’s not going to come ripping back in a month.”Despite the potential of a long crypto winter, some venture capitalists are still committed to the space. Crypto VC firm Multicoin Capital announced a new $430 million fund on Tuesday. On the same day, Lightspeed Venture Partners said it formed an independent team dedicated to blockchain investments called Lightspeed Faction.