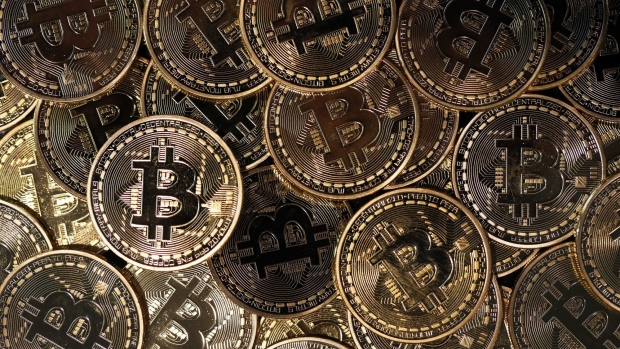 A collection of bitcoin tokens sit in this arranged photograph in London, U.K., on Wednesday, Jan. 4, 2017. Bitcoin steadied after its biggest drop since June as investors and speculators reappraised the outlook for initial coin offerings. Photographer: Chris Ratcliffe/Bloomberg , Bloomberg

(Bloomberg) -- The crypto market’s recent crises are prompting some major soul-searching among a very important constituency: the venture capitalists who have pumped billions of dollars into the industry over the past two years.

The startups backed by these investors have floundered amid a crippling market downturn. Layoffs have swept across some of the biggest names in blockchain such as Coinbase Global Inc., Gemini Trust Co. and Crypto.com. Companies like BlockFi Inc. are looking to raise capital at lower valuations and projects like the Terra blockchain and Celsius crypto lending platform are in crisis.

By backing these startups, venture capitalists helped create crypto’s cornerstones and cleared the way for greater mainstream recognition of digital currencies. But the latest series of tremors has helped trigger a crypto winter that could heighten the impression that the entire industry is more about hype than value.

The latest debacle stems from what unfolded at Celsius Network Ltd., which runs one of the biggest crypto lending platforms. The company said on June 12 that it was freezing withdrawals, swaps and transfers after being dogged for weeks with concerns that it would be unable to deliver the massive returns it promised customers.

The turmoil at Celsius came on the heels of the collapse of the TerraUSD algorithmic stablecoin and its Luna sister token. Celsius’s list of investors isn’t as star-studded as Terra and Luna’s, which includes Mike Novogratz’s Galaxy Digital Holdings Ltd., Pantera Capital Management, hedge fund Three Arrows Capital and Jump Crypto. But Celsius’s problems still seem to be contagious. Three Arrows Capital is now battling speculation that it is insolvent and Babel Finance, another crypto lender, froze withdrawals on Friday.

The missteps of large, leveraged and risky entities like Terra and Celsius caused major shocks to crypto’s system, according to Alex Pack, co-founder and managing partner of crypto venture firm Hack VC.

“This was on our bingo card of what could go wrong,” he said in an interview, pointing out that his firm had been an investor in Terra, but sold its entire stake in the fourth quarter of last year.

Celsius and Terra’s troubles have caused crypto prices to plummet further, with Bitcoin falling below $20,000 over the weekend to notch a decline of more than 30% so far this month. As crypto descends further into a bear market, the white-hot valuations of the industry’s startups have been called into question, according to Joe Zhao, a partner at Millennia Capital.

“A lot of the valuations that were given last year were based on growth,” Zhao said in an interview.

Venture capitalists poured more than $54 billion into crypto startups since the start of 2020, according to PitchBook, with companies like OpenSea and Alchemy scoring multibillion dollar valuations. However, startups should now focus more on staying afloat than unicorn status, according to Zhao.

“Surviving is winning in this environment,” he said.

Tom Schmidt, a partner at Dragonfly Capital, said he’s seen crypto deals fall through and funding leads pull out of investing rounds, and that companies at all stages are taking valuation hits, with some raising down rounds. BlockFi, for example, is looking to raise at a $1 billion valuation, a decline from its previous worth of $3 billion.

He also said that a lot of crypto startups might have over-hired during the bull market, which has led to a wave of layoffs. Coinbase, for example, slashed 18% of its workforce, while Gemini trimmed 10% of its headcount.

“Cut fat if you’ve over-hired, fire now to make sure that you’re not avoiding a much more painful process down the line,” Schmidt said of the advice he gives to Dragonfly’s portfolio companies.

Still, crypto venture capitalists see light amid a dark winter. Lauren Stephanian, a partner at Pantera, said in an interview that while it’s hard to hear about layoffs, smaller companies may be able to take a bigger drink from the talent pool.

“What has been a little bit more heartening is seeing all the protocols and earlier stage companies that maybe struggled a little bit to find talent, be able to quickly hire the talent that’s been laid off,” she said.

Hack VC’s Pack sees the downturn as a kind of fire sale that gives venture capitalists the opportunity to invest in companies at a lower cost.

“You get to buy it at half off, or a third off,” he said. “It’s probably pretty incredible if you zoom out long enough.”

Spencer of Framework Ventures said he doesn’t think this crypto winter will last as long as the previous one, which stretched from 2018 until 2020. He said the big difference between this bear market and the last downturn is that there are clearer purposes for blockchain technology that range from nonfungible tokens to decentralized finance to gaming.

“People should come back and use this stuff,” Spencer said. “It shouldn’t just be like this nuclear wasteland.”