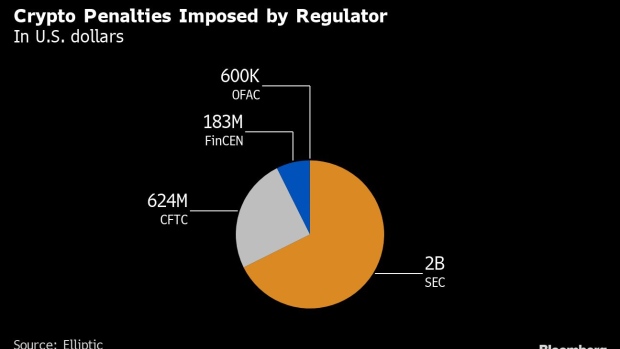 Network cables connect mining rigs to servers at the CryptoUniverse cryptocurrency mining farm in Nadvoitsy, Russia, on Thursday, March 18, 2021. The rise of Bitcoin and other cryptocurrencies has prompted the greatest push yet among central banks to develop their own digital currencies. Photographer: Andrey Rudakov/Bloomberg , Bloomberg

U.S. regulators imposed $2.5 billion in penalties on the cryptocurrency industry since Bitcoin’s birth in 2009, according to researcher Elliptic.

The bulk of the penalties came last year, when Telegram Group Inc. and its wholly owned subsidiary TON Issuer Inc. settled SEC charges for violating federal securities laws and agreed to return more than $1.2 billion to investors and to pay an $18.5 million civil penalty. Telegram didn’t deny or admit wrongdoing.

“These fines demonstrate that crypto is far from unregulated,” said Tom Robinson, co-founder of Elliptic. “Existing laws and regulations are already being used to limit and penalize illicit use of crypto assets.”

More recently the CFTC emerged as a major force imposing fines as well, according to Elliptic, which is used by regulators, financial institutions and other businesses to track cryptocurrency transactions.

“These penalties have not slowed down the crypto industry - in fact they have helped it to grow,” Robinson said. “They provide comfort to consumers, and regulatory clarity to businesses.”

“The ransoms being paid to cyber crime groups are being cashed out at these exchanges, and addressing this will be key to reducing the number of ransomware attacks,” Robinson said. Recent ransomware attacks involving Bitcoin have impacted the Colonial Pipeline and JBS.