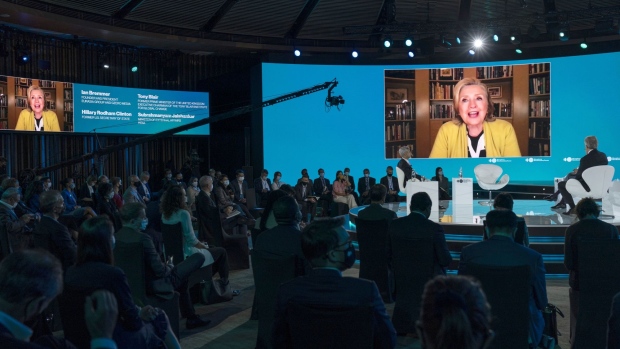 A worker inspects illuminated mining rigs operating inside racks at the CryptoUniverse cryptocurrency mining farm in Nadvoitsy, Russia, on Thursday, March 18, 2021. The rise of Bitcoin and other cryptocurrencies has prompted the greatest push yet among central banks to develop their own digital currencies. Photographer: Andrey Rudakov/Bloomberg , Bloomberg

Clinton said via video during a panel discussion at the Bloomberg New Economy Forum on Friday in Singapore that governments around the world faced a range of new challenges, including disinformation and artificial intelligence.

“One more area that I hope nation-states start paying greater attention to is the rise of cryptocurrency -- because what looks like a very interesting and somewhat exotic effort to literally mine new coins in order to trade with them has the potential for undermining currencies, for undermining the role of the dollar as the reserve currency, for destabilizing nations, perhaps starting with small ones but going much larger,” the former Secretary of State said.

How Bitcoin Is Edging Toward the Financial Mainstream: QuickTake

Clinton’s comments came while criticizing Russian President Vladimir Putin, accusing him of deploying “a very large stable of hackers and those who deal in disinformation and cyberwarfare.”

In 2017, Clinton blamed Russian interference along with questionable decisions by the Federal Bureau of Investigation for her loss the year before to Republican Donald Trump in the U.S. presidential election. She highlighted Russia’s role in hacking into her campaign’s internal emails and later coordinating their release on WikiLeaks.

“With his oligarchic coterie he has utilized many non-state actors to personal as well as nationalistic goals, and I think that’s going to become a greater and greater threat,” she said at the forum in Singapore.