Walmart Inc. and a press-release distributor are investigating a hoax tying the retailer to a supposed cryptocurrency deal after an announcement, later determined to be false, caused a short-lived surge in Litecoin through a highly unregulated market.

According to the release on GlobeNewswire at 9:30 a.m. in New York, Walmart would start letting its customers pay with Litecoin, a relatively obscure instrument that isn’t among the top 10 cryptocurrencies, according to CoinMarketCap.com. The statement was initially covered by Reuters, CNBC and Bloomberg News, fueling a jump of as much as 33 per cent for Litecoin. Within an hour, the retailer denied the statement, erasing most of the gain and sending a shudder through the broader cryptocurrency market. Litecoin also later confirmed the announcement was false.

The company and the newswire say they are now seeking to determine how the events transpired. Tracking down the perpetrator could prove difficult in the shadowy world of crypto transactions, and the episode may well bolster critics who argue that without regulation, digital currencies are susceptible to meddling from unscrupulous actors. 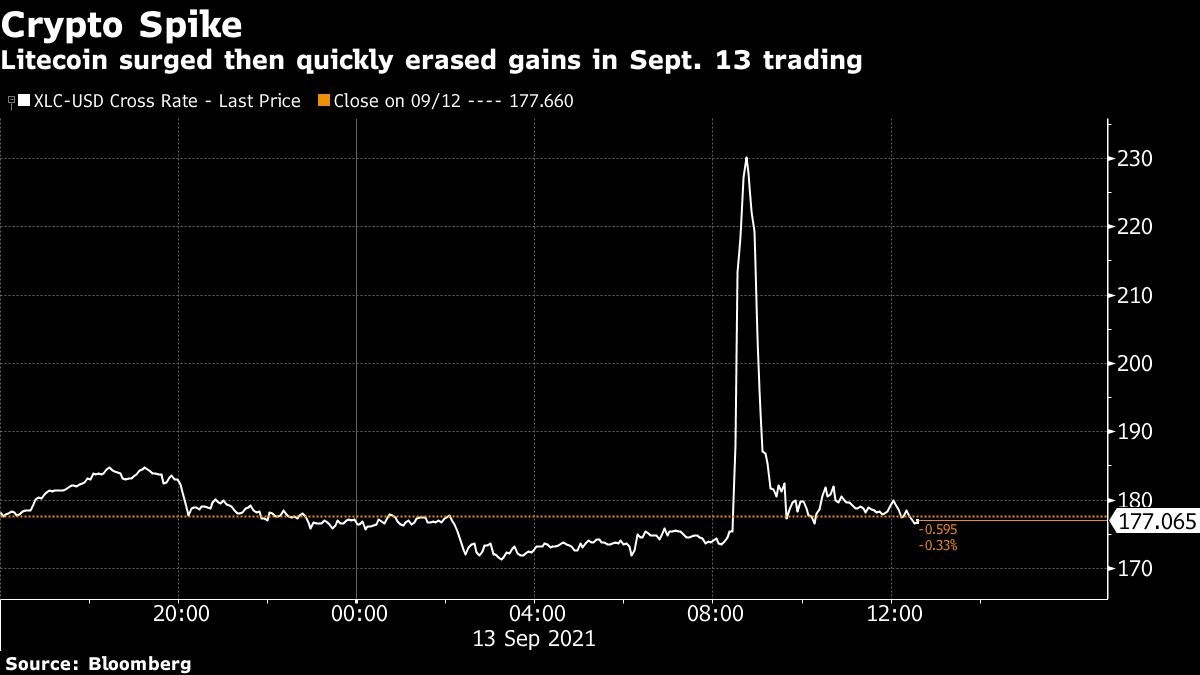 GlobeNewswire is working with authorities on an investigation, “including into any criminal activity associated with this matter,” according to an emailed statement from Intrado, which operates the newswire.

“This has never happened before and we have already put in place enhanced authentication steps to prevent this isolated incident from occurring in the future,” Intrado said. Intrado, which is controlled by Apollo Global Management, distributes 200,000 press releases per year, according to its website.

Adding credence to the news right after the phony statement’s appearance was a Twitter posting from Litecoin’s verified account, that linked to the release. That tweet was deleted after the announcement was determined to be fake, said Charlie Lee, creator of Litecoin and managing director of the Litecoin Foundation.

In an interview on Bloomberg TV with Emily Chang, Lee said he only owns about 20 Litecoin tokens and doesn’t have an incentive to participate in schemes that could pump the value of the digital currency.

“It’s really bad for this to happen, and we really need to look into it,” Lee said, adding that his foundation “really screwed up” by tweeting about the release. He said he has limited tools to look into what happened and said GlobeNewswire should investigate the incident.

The occurrence shows how fake statements remain an acute risk for newswire operators that put out the releases that dictate the daily flow of U.S. financial markets.

“If you’re putting out a press release that can move markets, you have tremendous potential for harm,” said Kathleen Culver, head of the Center for Journalism Ethics at the University of Wisconsin. “If you were someone who saw this, made some buys and then everything dropped back to Earth again, you could be out a lot of money.”

While fabricated releases aren’t new to the market, cryptocurrencies would seem to provide fertile ground for deception. Unlike stocks, trading is mostly untraceable, so scammers leave few tracks. And traders have become conditioned to expect outsize price reactions to the flimsiest of announcements -- when, say, Elon Musk namechecks a project on Twitter.

“We realize how powerful a single tweet can be in this day and age,” Lee said. “It was over-excitedness about the news. It happens.”

Walmart said it has “no relationship” with Litecoin in a statement after a representative told Bloomberg News that the company is trying to learn more about the erroneous news release. The Litecoin Foundation said in a tweet that it hadn’t entered a partnership with Walmart.

Litecoin rose 2 per cent at 4:14 p.m. in New York. Walmart shares slipped less than 1 per cent to US$145.06 at Monday’s close after earlier trading in positive territory.

Cryptocurrencies aren’t the only markets in which bad information has moved prices, of course. The SEC has gone after individuals for issuing phony press releases in recent years. The agency often relies on well-timed stock trades for clues as to who is behind the hoax, but it could be harder to unravel this hoax, since cryptocurrency is designed to be anonymous. The SEC, which declined to comment, has limited access to data on well-timed crypto trades and will likely have to turn to unregulated platforms for more information.

“Even highly regulated markets like the stock market can be manipulated in this way,” said Jeffrey Timmermans, a business journalism professor at Arizona State University. “The crypto market is so volatile, it does tend to have a big retail investor participation, and these are the people who are also likely to jump in on rumor and speculation.”

It’s unclear whether the episode will dissuade big companies from partnering with cryptocurrencies going forward. Their use has skyrocketed in recent years, with El Salvador even going as far as adopting Bitcoin as legal tender, but questions about their susceptibility to meddling and pump-and-dump schemes has fueled skepticism in many corners of the market.

Companies are preparing for a further integration, however. Walmart advertised a position earlier this year to develop “the digital currency strategy and product roadmap” while identifying “crypto-related investment and partnerships,” according to an August job posting on the company’s website.