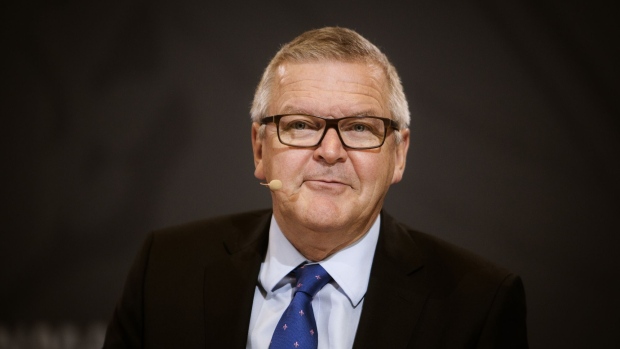 Lars Rohde, governor of Denmark's central bank, speaks during a news conference at the bank's headquarters in Copenhagen, Denmark, on Wednesday, Sept. 13, 2017. "We have previously seen that the economy can overheat vigorously and suddenly when it is booming,” Rohde said in a statement on Wednesday. , Bloomberg

(Bloomberg) -- Bitcoin and other cryptocurrencies are little more than a speculative fad that central bankers can probably ignore, according to Lars Rohde, the governor of Denmark’s central bank.

The much more serious threat stems from big tech, he said in an interview with Bloomberg Television on Thursday. If technology giants start “invading the currency area” and the means of transaction, then “that could be very interesting and maybe also a real threat to the autonomy and independence of central banks.”

He’s the latest central banker to warn that the disappearance of cash and the dominance of digital payments are upending the age-old framework within which monetary policy has operated. Earlier this month, Bank of England Deputy Governor Jon Cunliffe said governments and policy makers need to ensure they don’t get overtaken by private providers of payment services, and pointed to the “financial stability implications” of such a development.

Central bankers from China to Sweden are already working on their own digital currencies in response to the falling use of cash. But the process is fraught with technical and legal hurdles, making it harder to complete than initially anticipated. Denmark isn’t among the frontrunners, though neighboring Sweden may have a digital central bank currency within five years, according to Riksbank Governor Stefan Ingves.

The intense spike in speculation surrounding cryptocurrencies has raised questions as to whether they have the potential to disrupt major markets such as currencies and bonds. European Central Bank Vice President Luis de Guindos said earlier this month that the tokens shouldn’t be seen as real investments, while Bank of England Governor Andrew Bailey said people should buy them only if they’re prepared to lose their money.

Rohde said he’s “tempted to ignore” Bitcoin and other cryptocurrencies. “It’s a very speculative asset at best. There is no stability and no guarantee from any side about the value of cryptocurrencies.”

In Denmark, the main role of the central bank is to defend the krone’s peg to the euro. That’s required it to keep its main policy rate negative since mid-2012, which is longer than anywhere else in the world.