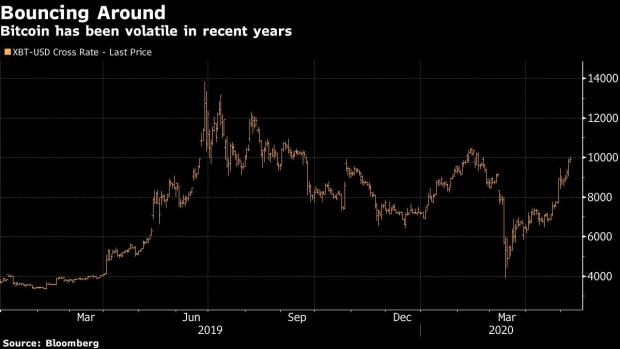 Cables run into terminal ports on the Sberbank and SberCloud Christofari supercomputer during an event to mark its launch into commercial operation inside the Sberbank PJSC data processing center (DPC) at the Skolkovo Innovation Center in Moscow, Russia, on Monday, Dec. 16, 2019. As Sberbank expands its technology offerings, the Kremlin is backing legislation aimed at keeping the country's largest internet companies under local control by limiting foreign ownership. Photographer: Andrey Rudakov/Bloomberg , Bloomberg

(Bloomberg) -- Cryptocurrency-focused hedge funds’ assets under management jumped in 2019, according to a new survey, but there were some big differences in performance during the year.

Total AUM of crypto funds rose to more than $2 billion at the end of last year from $1 billion at the end of 2018, and the average per fund jumped to $44 million from $21.9 million, according to a survey from PwC and Elwood Asset Management Services Ltd., an investment firm specializing in digital assets. Of course, that was in a year where the price of Bitcoin soared 95%.

Discretionary long-only funds had the best median performance at 40%, with an average 42% gain, according to the survey. Discretionary long/short had both an average and median advance of 33%. Multi-strategy funds increased a median 15%. And while quantitative funds saw a median 30% increase, they enjoyed an average 58% gain, with the 28 percentage point difference between the two figures implying that there were some outsized outperformers.

“The volatility of crypto markets offers many opportunities for quant traders,” said Henri Arslanian, PwC global crypto leader and partner. “The performance of crypto quant funds tends to be more linked with market volatility rather than market performance.”

The report came with a caveat: The results were provided by the fund managers themselves, and weren’t verified by an independent fund administrator or other third party.

Cryptocurrencies have their detractors, notably the likes of Nouriel Roubini and Warren Buffett, the latter of whom called Bitcoin “probably rat poison squared” in May 2018. But they’ve continued to make inroads, with institutions increasingly paying attention, and gradual rollouts of new products like futures and options.

“It is interesting to note that Litecoin was mentioned by funds as one of their top traded altcoins despite its market cap being relatively smaller than the other mentioned altcoins,” the report said.

Family offices comprised 48% of investors in hedge funds, with high-net-worth individuals 42%. Only a few percent were foundations or endowments, venture-capital funds or funds-of-funds, and none of the respondents cited pension funds, according to the survey.

“I expect the crypto hedge fund industry to grow significantly over the coming years as investing in a crypto fund may be the easiest and most familiar entry point for many institutional investors looking at entering this space,” PwC’s Arslanian said.