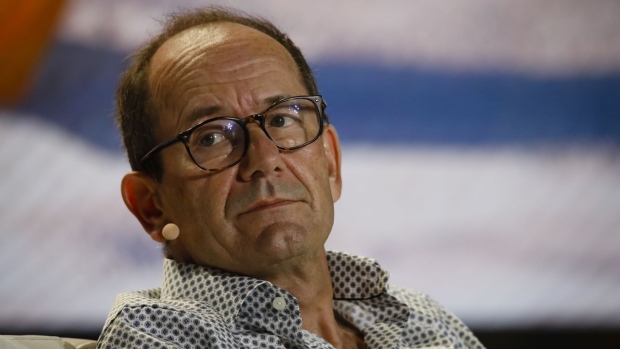 Fred Thiel, chief executive officer of Marathon Digital Holdings, listens during the Bitcoin 2021 conference in Miami, Florida, U.S., on Saturday, June 5, 2021. The biggest Bitcoin event in the world brings a sold-out crowd of 12,000 attendees and thousands more to Miami for a two-day conference. , Bloomberg

(Bloomberg) -- Crypto mining giant Marathon Digital Holdings Inc. is open to the possibility of being acquired for the right price, its chief executive officer said.

The Las Vegas, Nevada-based company is among the world’s largest publicly traded Bitcoin miners with a market cap of about $2.9 billion. The company forecasts it will have the capacity to generate 10% of the total computing power for the Bitcoin network by early next year.

“I am always willing to talk but it’s got to be the right price,” Fred Thiel said in an interview with Bloomberg during the Empower industry conference in Houston on March 31. “If somebody offers us a huge premium over our market cap, I have to take it under consideration and that may be the right thing to do for the investors.”

The market for acquisitions stems from the potential for companies in the energy sector to reap higher margins by mining Bitcoin themselves rather than providing power and infrastructure to the miners.

“A generating company can sell their electricity to themselves at a lower cost, so they would be the most profitable Bitcoin miner over time,” Thiel said. “How do they scale? They go find a big miner that they are going to acquire and they get scaled overnight.”

Power companies could also balance electricity load demands to boost income. The mining operations can take up surplus power supplied from renewable generations such as wind and solar during off-peak times, while scaling back when the grid is under stress by high demand.

For example, in a 500 megawatt power facility, using 200 megawatts to mine Bitcoin can generate additional cash flow, Thiel said.

So far, however, only a handful of companies have dived into self-mining Bitcoin as it is difficult to gauge investment returns from mining given the volatile Bitcoin price. Energy producers such as Talen Energy Corp. own power and data centers and work with Bitcoin miners without investing more in expensive mining equipment. And building such facilities would require millions of dollars in grid upgrades for sites that are in a remote area, as well as an overhaul on power transmission systems.

“Energy companies are going to be the companies that at the end of the day consolidate the industry,” Thiel said. But building such facilities “is the single biggest input cost.”