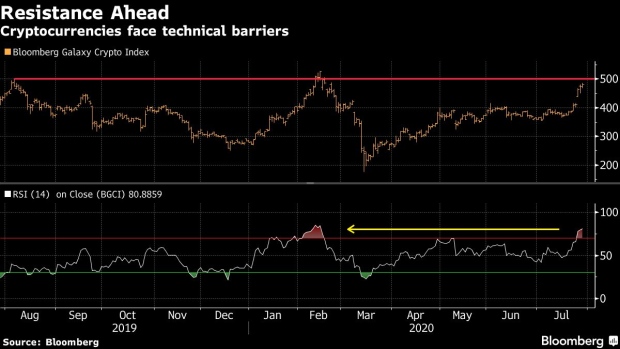 (Bloomberg) -- The cryptocurrency market may be about to face a big test in the wake of this week’s resurgence.

The Bloomberg Galaxy Crypto Index, which measures the performance of many of the most widely traded tokens including Bitcoin and Ether, is approaching the 500 level that it’s come close to but failed to breach on two attempts this year. A technical gauge known as the relative-strength index is also overbought at 80, near the level during the February run-up that hit a roadblock.

Bitcoin, the largest cryptocurrency, has surged almost 17% this week amid speculation further U.S. monetary and fiscal stimulus risks eroding the value of the dollar and fueling inflation.

“You’re probably going to have a strong catalyst for the next move higher, because we’re still far away from the record highs,” says Ed Moya, senior market analyst at the Oanda Corporation. “Once you break past these levels, you’re going to see that interest grow and that’s just going to continue to add to that bullish momentum that should be spurring off of this dollar weakness.”

Although the 14-day relative-strength indexes indicate that both Bitcoin and gold are overbought after their recent rallies, crypto’s pace of gains may withstand the test of time, Moya said.

“The fundamentals are starting to improve on the embracement of institutional interest into this space and that’s probably going to provide some longer-term support as well,” he said.