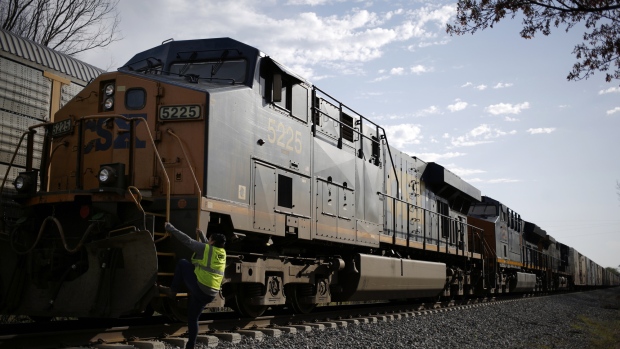 The analysts surveyed by Zacks Investment Research expected earnings of $1.11 per share in the latest quarter.

CSX reduced its outlook for the year. The railroad now predicts revenue will be down 1% to 2% this year. Previously, CSX said it expected revenue low-single digit revenue growth on the year.

The biggest drop in CSX's freight came in the intermodal category where shipments of containers taken off ships fell 10%. Shipments of metals and equipment fell 9%, and fertilizer shipments declined 5%.

CSX Corp. is more than two years into an operational overhaul designed to enable the railroad to handle more volume with fewer locomotives and employees by operating on a tighter schedule. During the second quarter, expenses declined another 3% to $1.76 billion.

The railroad's stock was down about 5% to $75.44 in after-hours trading following the release of the earnings report.