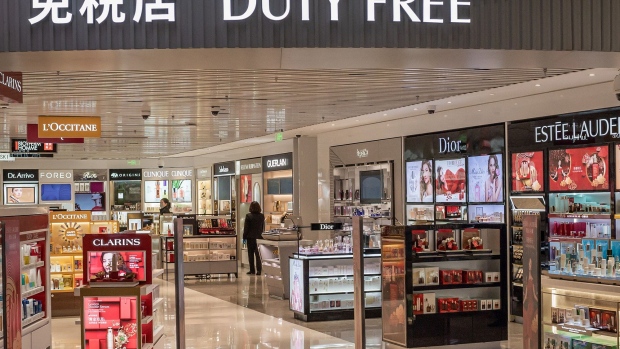 The world’s largest retailer for travelers sold 102.8 million shares at HK$158 each, it said in an exchange filing Friday confirming an earlier report by Bloomberg News. The price represents a discount of about 27.5% to Thursday’s close in Shanghai, according to Bloomberg calculations. The shares are set to start trading in Hong Kong on Aug. 25.

The offering injects activity into a slow market for initial public offerings in Hong Kong, where 2022 has seen just $5.1 billion raised this year, slumping 86% compared with the same period in 2021. It’s a trend also seen globally amid rising interest rates and high inflation. Prior to CTG Duty Free, the year’s largest listing in the city was Tianqi Lithium Corp.’s $1.7 billion share sale last month.

The company priced the Hong Kong shares above the mid-point of a marketed range, as some analysts pointed to woes regarding valuation and the impact of recent Covid-19 outbreaks.

CTG Duty Free shares in Shanghai climbed as much as 1.2% on Friday. They have declined nearly 19% from this year’s peak on June 30.

“With the A-shares falling in the past few days, it is hard to argue pricing at the high end,” said Ke Yan, head of research at DZT Research in Singapore, citing factors including China’s movement controls aimed at slowing the spread of the virus.

The allocations of Hong Kong shares were heavily skewed toward long-only investors and sovereign wealth funds, with the top 15 investors taking about 70% of the listing, a person familiar with the matter said, asking not to be identified as the information is private. A company representative didn’t immediately respond to a request for comment.

CTG Duty Free’s Hong Kong share sale comes as the tropical island of Hainan, a major tourist destination in China and the source of the majority of the company’s revenue, is seeing one of the worst outbreaks since Shanghai’s lockdown earlier this year. The crisis has stranded 150,000 tourists, leading to protests and some reports of food shortages.

Despite strict lockdown measures that have lasted over two weeks now, cases continue to balloon with the province reporting 1,499 cases Thursday, a day after national infections hit their highest level in three months.

CTG Duty Free reported preliminary net income for the first half of 2022 of 3.94 billion yuan ($580 million), a drop of almost 27% from the same period last year. The company derives about 70% of revenue from Hainan and 18.5% from Shanghai, according to its latest annual report.

Demand for tax-free shopping had collapsed at the outset of the pandemic in 2020, until government easing of restrictions on domestic duty free purchases that year helped fuel a rebound.

In particular, authorities doubled the annual limit on domestic duty-free purchases in Hainan to 100,000 yuan per person, and also allowed such shops to operate outside of Hainan in cities including Beijing and Shanghai. The measures proved enticing to millions of Chinese people who are used to traveling overseas for luxury shopping.

CTG Duty Free’s 3Q profit growth may pick up momentum after 2Q as travel restrictions ease, aiding the return of domestic tourists to its Hainan duty-free malls. The company is guiding for flat gross-margin growth in 2Q versus 1Q’s 34%, despite a sharp sequential sales drop, implying better cost control and reduced discounting by CTG.

CTG Duty Free suspended a potential $5 billion Hong Kong listing last December, joining a slew of companies that chose not to move ahead with deals amid a choppy market. The seller of tax-exempt goods such as tobacco, wine and perfumes to travelers considered reviving the listing plan to seek as much as $3 billion, Bloomberg News reported in June.

The Hong Kong listing has attracted nine cornerstone investors including China State-Owned Enterprise Mixed Ownership Reform Fund, AmorePacific Group and Shanghai Airport Investment Corp. Together, the investors were willing to snap as much as $795 million in shares, according to terms of the deal seen by Bloomberg prior to the pricing.