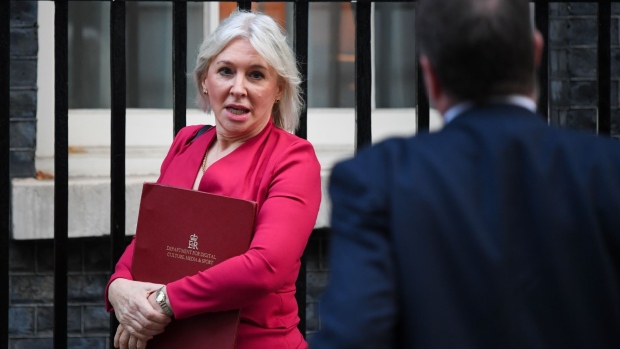 Nadine Dorries, U.K. culture secretary, arrives for a weekly meeting of cabinet minsters at number 10 Downing Street in London, U.K., on Tuesday, Nov. 16, 2021. U.K. Prime Minister Boris Johnson’s latest effort to draw a line under an escalating lobbying and sleaze row engulfing his government was thwarted at the last minute in the U.K. Parliament. , Bloomberg

Tom March, the Brits’ new chair and co-president of Polydor Records, said in a statement announcing the move that it felt like “the right time to celebrate the achievements of artists for the music that they create, and the work that they do, irrespective of gender.”

But the decision drew the ire of Dorries, who told a Parliamentary Committee on Monday that it was “quite a sad decision.”

“If you wanted to look at who used to win awards for novels and many things in the past, then men always dominated,” she said. “My concern would be that women weren’t fairly represented moving forward.”

Other big music ceremonies dropped separate male and female categories much earlier, including the Grammys. Pop star Sam Smith, who identifies as non-binary and was excluded from the Brits award categories this year, was among those lobbying for the change.