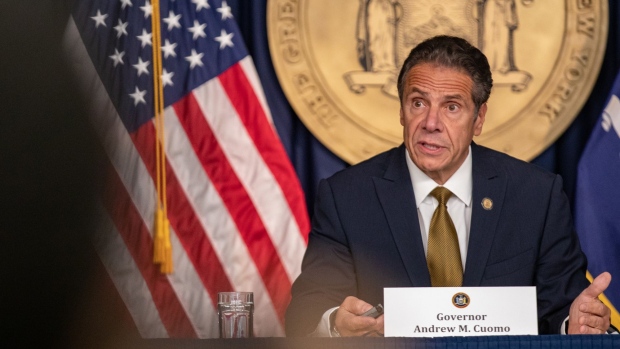 (Bloomberg) -- Sexual harassment suits against Andrew Cuomo will face an easier path under changes to state law the governor signed two years ago, though New York taxpayers could be on the hook for the damages.

Cuomo has been facing a political firestorm since New York Attorney General Letitia James on Tuesday released a bombshell report finding that he sexually harassed 11 women, with political figures from President Joe Biden on down calling for his resignation. Local prosecutors have also begun exploring criminal charges against the governor.

Though Cuomo has not yet been sued by any of the women, James said on Tuesday that they could bring lawsuits. Her report clearly stated that Cuomo violated employment discrimination laws through his harassment of state workers, saying specifically that he created a “hostile work environment.”

Changes in the state law enacted in 2019 in response to the #MeToo movement removed major obstacles to such suits, and James, whose office would typically defend the governor against civil claims, offered a clear roadmap for plaintiffs.

Cuomo, who has denied all of the findings in James’s report and refused to step down, is also likely to argue that any liability falls on the state rather than himself, legal experts said.

It’s a situation similar to that faced by many corporations whose top executives have been accused of sexual harassment. Employment lawyer Miriam Clark said she wasn’t sure how personally liable Cuomo would be as governor, noting that the law was aimed at providing redress to workers rather than punishing their harasser.

“The question is complicated because the bill clearly applies to all employers and it’s clearly intended to apply to the state,” said Clark, who helped draft New York’s sexual harassment law.

Employment lawyer Kevin Mintzer said Cuomo would likely seek to have taxpayers pay for his legal defense as well as any verdict issued against him. Though the attorney general’s office usually defends suits against the state and officials, Mintzer said he would expect James to hire outside law firms to handle any claims over Cuomo’s misconduct.

Citing James’s report, a court could preclude the state from contesting the women’s allegations, Mintzer said, though other obstacles would remain. That’s where the 2019 changes would come into play, he said.

New York that year extended the time limit to bring workplace sexual harassment claims to three years from one. The state also removed the legal requirement that harassing conduct had to be “severe and pervasive” for a claim to succeed.

Mintzer said some of Cuomo’s misconduct detailed in James’s report probably would have met the old standard, but others of the women might not have been able to sue.

“They have that option now,” said Mintzer. “I think it’s very significant.”

Some of the women would still face obstacles. James’s report includes instances of harassment that took place as long ago as 2013 and 2015, well beyond even the extended statute of limitations. Mintzer said it’s also unclear if the time extension would apply to conduct that took place before the law changed.

And even the New York state senator who sponsored the 2019 sexual harassment legislation said she wasn’t sure the law could reach the governor personally. Senator Alessandra Biaggi, who was one of the first politicians to call for the Cuomo to resign after harassment allegations first surfaced, said it was possible a court could find the governor wasn’t actually the women’s employer.

That could be the case “even though he is obviously literally their employer,” Biaggi said.