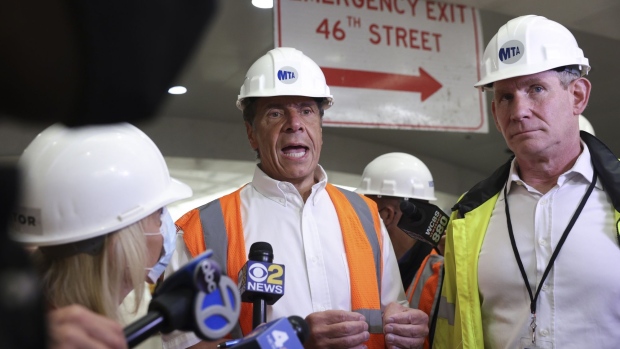 Andrew Cuomo, governor of New York, center, speaks during a media tour with Janno Lieber, chief development office for Metropolitan Transportation Authority (MTA), right, at Grand Central Terminal in New York, U.S., on Thursday, May 27, 2021. Governor Cuomo today announced the completion of civil construction on East Side Access - the MTA's megaproject connecting the Long Island Rail Road to a new 350,000-square-foot passenger terminal under Grand Central Terminal. This is the largest new train terminal to be built in the United States since the 1950s. , Bloomberg

Cuomo has been trying to overhaul the leadership structure of the largest U.S. public transit agency by splitting the role of chairman and chief executive officer into two separate positions, with Lieber, MTA’s current chief development officer and president of the agency’s construction and development, to serve as chief executive officer and Sarah Feinberg, the agency’s outgoing head of subways and buses, to chair the board.

Lawmakers spurned legislation the governor put forward over concerns the move would strip away some of their authority, put too much power in the hands of Cuomo appointees, and create confusion over who is ultimately in charge of the MTA.

“At this critical time in state history, I believe the best long-term approach to leading the MTA would be to have two strong, experienced leaders at the helm - Sarah Feinberg as the first woman chair and Janno Lieber as CEO,” Cuomo said in an emailed statement. “While the Senate has yet to act, the MTA nominees and leaders continue to be available for policy discussions and confirmation hearings, as they have been since the legislation was introduced nearly two months ago.”

Feinberg and Pat Foye, the MTA’s outgoing CEO, are set to leave the agency Friday, according to Tim Minton, spokesperson for the MTA. Lieber’s appointment is effective July 31.

“While I am disappointed in the Senate’s delay in taking up deliberations of our nominations, I have no doubt Janno will do a tremendous job in the acting role,” Feinberg said in the emailed statement from Cuomo’s office. “I hope to join him soon in leading the MTA and region through this next chapter.”

The leadership changes come as the MTA is struggling to restore ridership to pre-pandemic levels. Weekday subway usage is less than half of ridership levels in 2019. The agency estimates it faces a combined budget deficit of $3.5 billion in 2024 and 2025.