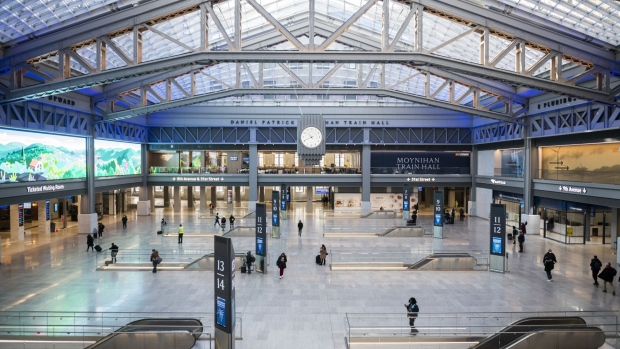 The entire project, including Penn Station in Manhattan, will be called the Empire Station Complex Project. It “will be the most ambitious mass transit development in the United States of America,” Cuomo said in a briefing Thursday. He has been talking for years about many of the improvements, which would likely require agreements with the Metropolitan Transportation Authority and other parties.

The 140-acre development on the West Side would include additional investment for Penn Station, a dirty and overcrowded warren below Madison Square Garden. He pledged to add 40% more capacity by adding eight underground tracks in a new terminal called Penn South. The plan also would extend the High Line elevated park to improve access to the commuter station and the newly opened Moynihan Train Hall, which primarily serves Amtrak.

Cuomo also proposed a 1.2-million-square-foot expansion of the Javits Center, a redevelopment of the Port Authority bus terminal, and the expansion of the Second Avenue subway line from 96th Street to 125th Street, which he said would bring more development across Harlem.

The governor, a Democrat, said he hopes Washington will help fund portions of the project. He didn’t provide further details on how the state would fund the massive undertaking. Cuomo’s executive budget is due by Jan. 19.

New York state has been pushing to redevelop the area around Penn Station, accelerating the shift of Manhattan’s core toward the West Side. The governor’s plan would make 14 building sites available yielding 20 million square feet of retail, commercial and residential development, he said. The sites will be prioritized for as many as 1,400 affordable housing units.

Last year, Cuomo promised to expand the Penn’s capacity by 40% and create new developments to fund the improvements. On Jan. 1, he opened the Moynihan hall, a $1.6 billion project that expands the nation’s busiest rail terminal by 255,000 square feet (23,690 square meters) to serve Long Island Rail Road and Amtrak passengers. The new facility is designed to provide more room for the 650,000 people who traveled through the station every day before the pandemic.

Vornado Realty Trust, one of Manhattan’s biggest office landlords, is spending more than $2 billion to redevelop sites around the station and has attracted Facebook Inc. and Apple Inc. as tenants.

On Thursday, Cuomo also called on Washington to move forward with the Gateway Project, an $11 billion project to build a new rail tunnel under the Hudson River that’s been stymied. “New York has neither the resources or the patience to partner in more wasteful bureaucracy,” Cuomo said.