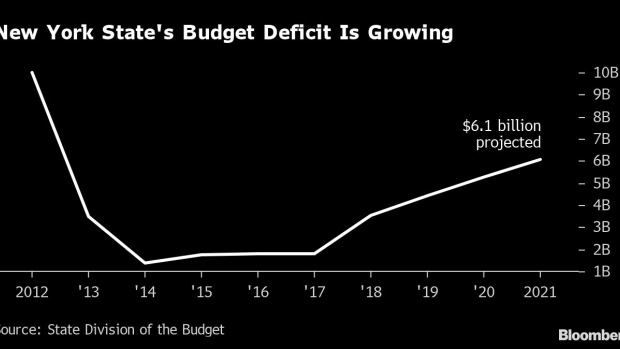 (Bloomberg) -- New York Governor Andrew Cuomo may be spending much of the new year explaining how he was caught off-guard by a $6.1 billion hole looming in his next state budget, caused mostly by rising Medicaid costs.

It’s the largest gap since Cuomo took office. Amid New York’s recovery from recession, he ordered $10 billion in cuts to health care, education and personnel for the 2011-2012 fiscal year. This shortfall, disclosed in a report last month, occurred during a strong economy as revenue increased. Critics say the third-term Democratic governor should have known better.

Now, as Cuomo prepares to propose a 2020-2021 budget in January, lawmakers and interest-group advocates are already quarreling over whether to impose more taxes on the rich or cut services to the poor and middle class. If current spending trends continue, the state would face an $8.5 billion deficit in 2023, of which about $3.9 billion would be for Medicaid. Cuomo’s budget office says it’s looking for savings.

“While Medicaid spending is projected to grow at almost 6% a year nationally, we are developing a plan to be introduced in January that will once again limit New York State’s Medicaid spending growth and continue high quality care without raising taxes to cover the cost,” said Freeman Klopott, the state budget office spokesman.

According to Moody’s Investors Service, New York’s Medicaid burden is set to increase 6.6% a year through 2023, after five years in which Cuomo-ordered changes reduced annual growth to 2.2%. This year’s increases result from the advent of a $15-an-hour minimum-wage for health-care workers, a 12% increase in long-term care enrollment and reduced federal aid. Describing the situation as “a credit negative,” Moody’s continued to rate the state’s credit as Aa1 stable.

The gap represents about 6% of the state’s $102 billion portion of a current $175 billion budget, including federal aid.

The governor should have anticipated these increased obligations, said Andrew Rein, president of the Citizens Budget Commission, a business-supported fiscal watchdog group. Rein is skeptical that Cuomo can fill the gap without deeper across-the-budget cuts, which would require legislative approval.

The CBC warned Cuomo earlier this year that Medicaid costs could spike and couldn’t be permanently papered over by the governor’s recent practice of delaying billion-dollar payments into the next fiscal year. Cost controls instituted by the governor eight years ago have failed to stem recent expense increases, Rein said.

“The state’s plan to address the Medicaid-driven budget gap is one part gimmick and one part delay,” he said. “A plan to solve the budget problem need not be done entirely within the Medicaid program. Other portions of the budget also should be considered, including mistargeted aid to wealthy school districts and unproductive economic development programs.”

Responding to the criticism, Klopott noted Cuomo’s record of cutting Medicaid costs. In 2011, when they were rising more than 13%, he created a Medicaid Redesign Team that capped annual spending growth based on a formula tied to the national medical cost of living. “New York State has kept Medicaid spending growth to less than half the national average – saving taxpayers over $19 billion,” Klopott said, “and this has been key to limiting overall state spending growth.”

In the state legislature, Democratic leaders are at odds over new taxes. Senate Majority Leader Andrea Stewart-Cousins is against them. Assembly Speaker Carl Heastie is for them. Heastie said he won’t accept cuts in services to the state’s six million New Yorkers enrolled in Medicaid who represent about a third of the state population. “We always believe in raising revenue,” he said earlier this month.

The battle may be joined over a revived proposal for a “pied-a-terre” tax on second-home purchases of $5 million or more. The measure, which real estate groups say will hurt an already-weak luxury housing market, would raise about $650 million, said state Senator Brad Hoylman, its chief sponsor, who first proposed it in 2014.

“They use our system of laws to protect their international investment in real estate, and I think there should be a premium on that,” said Hoylman. “This is a way to capture that purchasing power and use it for some common good.”

Spending cuts may also collide with demands for more school aid. Education advocates and teacher-union leaders say the state has failed to comply with a 2006 court order to fully fund its public schools, an obligation that may exceed $3.4 billion. Advocates say the amount owed -- based upon census data -- may be more due to rising school enrollments of homeless children whose households may not have been counted.

The homelessness problem has also created demands for more state spending in the form of rent subsidies to prevent evictions and as an alternative to shelters, said New York City Councilman Stephen Levin. He’s calling for the state legislature to spend millions of dollars to pay most of the cost of such subsidies. Tenant advocates also have demanded that Democratic lawmakers spend more on affordable housing.

“Albany needs to make the billionaires pay by a tax surcharge on the super-rich,” said Michael McKee, treasurer and spokesman for the statewide Tenants Political Action Committee. They are calling for repeal of tax incentives for developers that subsidize market-rate housing, programs he says cost the state about $4 billion.

New Yorkers won’t know until next month how Cuomo intends to address the gap opened by the failure to anticipate rising Medicaid costs. And the state can’t necessarily count on growth in tax receipts.

“A solution is not yet in sight,” Moody’s said in their Dec. 3 comment, warning that budget officials will find it “considerably more difficult for the state to tackle recurring operating deficits, especially if there is any pause in state revenue growth.”

--With assistance from Oshrat Carmiel and Keshia Clukey.

To contact the editors responsible for this story: Flynn McRoberts at fmcroberts1@bloomberg.net, Michael B. Marois