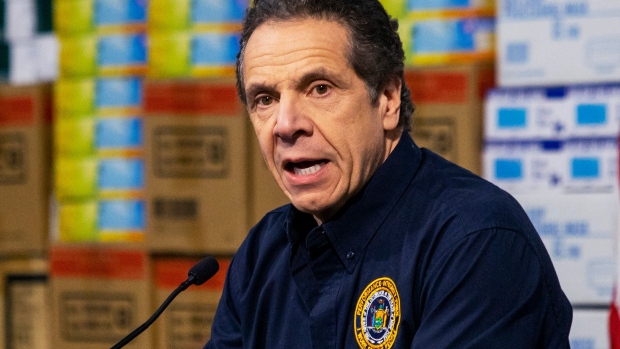 NEW YORK, NY - MARCH 24: New York Governor Andrew Cuomo speaks to the media at the Javits Convention Center which is being turned into a hospital to help fight coronavirus cases on March 24, 2020 in New York City. New York City has about a third of the nation’s confirmed coronavirus cases, making it the center of the outbreak in the United States. (Photo by Eduardo Munoz Alvarez/Getty Images) , Photographer: Eduardo Munoz Alvarez/Getty Images

(Bloomberg) -- The stimulus package working its way through Congress is “terrible” for New York state, the epicenter of the coronavirus pandemic in the U.S., Governor Andrew Cuomo said.

Cuomo has been the chief outside-the-Beltway critic of the Trump administration’s response to the coronavirus outbreak, demanding that Trump invoke his national-security authority to speed production of ventilators and other medical equipment.

He has also said that helping New York would also help other regions of the country where the outbreak probably will flare up next.

“The apex highpoint will be sequential across the country,” Cuomo said. “We’re asking the country to help us, we will return the favor.”

Some news was hopeful. The rate of hospitalizations among confirmed coronavirus patients has declined to about 12%, from a peak of 23% on March 18, Cuomo said. The decrease could be attributed partly to expanded testing.

“This is a very good sign and a positive sign. Again, I’m not 100% sure it holds or it’s accurate, but the arrows are headed in the right direction,” Cuomo said.

Cuomo has repeatedly complained that too many New Yorkers aren’t taking social distancing seriously, particularly on streets and in parks.

Authorities are experimenting with street closures in New York City so that pedestrians can keep their distance from one another, Cuomo said. They’re also mandating social distancing in playgrounds, which means no close-contact sports like basketball.

He said that law enforcement officers will be watching. “If it doesn’t happen, we will actually close down playgrounds,” Cuomo said.

The state is racing to add hospital capacity to meet a projected need of 140,000 beds. In addition to the existing 53,000 or so hospital beds in the state, another almost 30,000 will be added by retrofitting dormitories at downstate public colleges, Cuomo said.