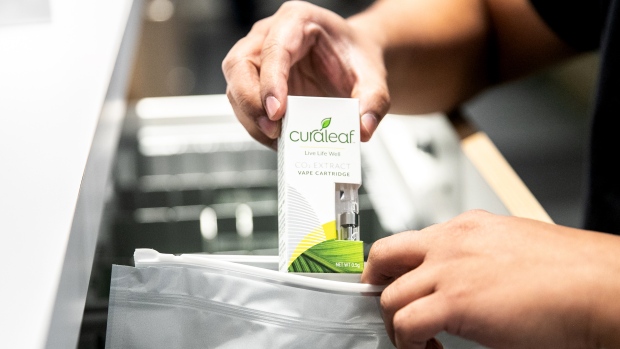 An employee puts a vape cartridge in a bag at a Curaleaf Inc. store in the Queens borough of New York, U.S., on Thursday, Oct. 18, 2018. , Jeenah Moon/Bloomberg

U.S. publicly traded cannabis companies will soon be able to uplist their shares to major stock exchanges if the U.S. Congress passes marijuana banking reform legislation, according to the head of Curaleaf Holdings Inc.

Cannabis is still illegal according to federal law in the U.S. despite 35 states legalizing it for medical use and 14 states allowing recreational use. That's led U.S. cannabis operators that seek new capital through public markets to tap the Canadian Securities Exchange or the NEO Exchange as those exchanges do not restrict U.S. companies from listing, whereas the TMX Group Inc.'s Toronto Stock Exchange, the New York Stock Exchange and the Nasdaq do not permit listings by U.S.-based marijuana companies.

"I don't think it's far away but it might take a year to get the legislation good. So it might happen next year," Jordan said.

While some U.S. investors may not have direct access to the Canadian Securities Exchange due to brokerage restrictions, the sentiment driving the cannabis sector over the past several months due to the growing likelihood that a Democrat-controlled Congress would legalize pot has also lifted the valuations of dozens of publicly-traded Canadian companies. Those valuations have risen despite the fact that Canadian cannabis companies cannot directly compete in the U.S. cannabis market.

Jordan said that he's concerned that U.S. retail investors do not fully understand the cannabis market and are investing in Canadian players despite their lack of a direct U.S. presence.

"We trade at a massive discount, and we are three times the size of Canopy Growth and I trade at a discount to Canopy. I mean that's not normal. You can't find that anywhere else in the world," he said.

Jordan's comments come a day after Curaleaf reported a 186 per cent rise in managed revenue in the fourth quarter to US$233 million, along with a net loss of US$35.3 million. The company completed eight acquisitions over the past year, including the purchase of European cannabis distributor EMMAC Life Sciences Inc. for US$285 million.

The European deal isn't expected to drive material revenue for Curaleaf until a few years from now, but it comes at an auspicious time when several Canadian companies are reducing their exposure to Europe's cannabis market. On Tuesday, Canopy Growth Corp. said it proposed to shut down its Danish production facility.

"I basically doubled the size of my potential market for less than two per cent of my market cap. I don't know what industry in the world you can do that," he said.

"That's what we're doing here. We just bought a business for $300 million that we think can be equal in size to the U.S. in five years."