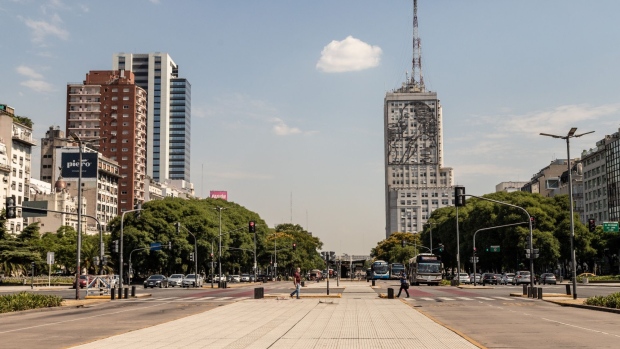 A nearly deserted sidewalk on 9 de julio avenue during a heatwave in Buenos Aires, Argentina, on Tuesday, Jan. 11, 2022. Argentina’s key agriculture areas saw intense and prolonged heat, coupled with little or no rain, through Jan. 12. , Bloomberg

(Bloomberg) -- Argentina’s agreement with the International Monetary Fund has several unknowns but one thing is clear: for it to succeed, the government will have to unwind a politically sensitive strategy of spending billions on energy subsidies.

Economy Minister Martin Guzman said Friday it had reached an agreement with the IMF to gradually reduce the country’s budget deficit, with the Washington-based organization adding that cutting energy subsidies will be “essential for improving the composition of government spending.”

But cuts to the popular subsidies, which proved politically damaging for former president Mauricio Macri when he attempted it late last decade, may be easier said than done. Argentina spent close to $11 billion in energy subsidies last year, according to the General Mosconi Argentine Energy Institute.

“Utility prices would have to be much higher than what the government promised last year to really make a difference,” Daniel Kerner, a managing director for Latin America at the Eurasia Group, said in a report on Friday. “The details on this will be key to evaluating whether this understanding is sustainable.”

Argentina is preparing 2022 utility fee increases for households, with a ceiling of 17% for electrical power prices and 20% for natural gas prices, depending on the user’s income bracket. Annual inflation in the South American nation ended last year above 50%, meaning that the planned increases only cover part of the consumer price gains.