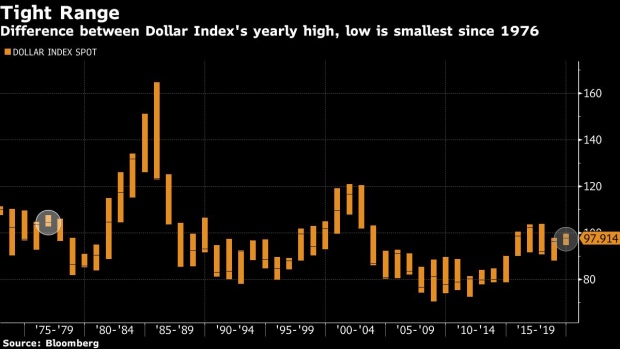 Intercontinental Exchange Inc.’s U.S. Dollar Index is on track for its narrowest annual trading band since 1976, with its 2019 high less than 5% above its low. A JPMorgan Chase & Co. gauge of foreign-exchange volatility lingers near all-time low levels reached in July.

The subdued moves in the currency market have created an environment where corporations are becoming less willing to pay up for hedging protection they haven’t needed, according to Cambridge Global Payments, which advises companies on cross-border transactions. For multinational companies looking to trim hedging costs, the risk is that volatility erupts again and the subsequent currency moves “destroy profits,” said Cambridge’s Karl Schamotta.

‘Asleep at the Switch’

“As the old metaphor goes, what we’re looking at is nickels being picked up in front of steamrollers,” said Schamotta, the firm’s Toronto-based director of FX research and strategy. “I think many corporates are asleep at the switch right now.”

There are no exact numbers reflecting currency effects on profits, and the benefits of hedging, since not every company reports detailed figures. North American corporations reported $21 billion in quantified negative currency impacts in the second quarter of 2019, according to a report from FiREapps, a foreign-exchange management firm. In Europe, the effect was only $1.55 billion.

The U.S. Dollar Index is currently trading near the middle of its 2019 trading range. Much of the calm can be attributed to the euro-dollar cross, which makes up roughly 60% of the gauge’s weighting and is locked in its tightest range on record. The common currency has plied in a 6% band between $1.0879 and $1.1570 since Jan. 1, and is currently trading at $1.1059.

“At a really simple level, the market is priced for good things in the U.S. and bad things in Europe, and we go on getting exactly that,” Juckes said.

While hedging costs have ebbed in recent months, muted volatility has clients of foreign-exchange consultancy Tempus Inc. in Washington taking on more currency risk heading into 2020.

“It’s kind of selling insurance; it’s expensive,” said Tempus currency strategist John Doyle. “If FX volatility is low and there’s no urgency, that can fall down their list of day-to-day priorities. That’s what we kind of see with our clients.”

Among the clients stepping away from hedging are small and medium-sized multinational corporations, according to Doyle. Those companies tend to have thinly staffed treasury or accounting departments with employees “wearing different hats” rather than a dedicated currency specialist, he said.

Not everyone is swayed by the low volatility. While corporations may approach hedging decisions on a more tactical basis, long-term investors, such as pension funds, aren’t as quick to abandon protection, according to Record Currency Management Chief Executive Officer James Wood-Collins.

“Pension funds tend to view hedging as a long-term strategic decision,” said, Wood-Collins, whose Windsor, U.K.-based company oversees roughly $60 billion of currency exposures for pensions and other investors. “They’ll put a hedge protocol in place and renew that program on a multi-year cycle.”

It’s unclear where the next bout of turbulence may come from, or when it will erupt. Schamotta thinks a surprise stabilization in China or Europe’s economies could upset the dollar’s resilience. Doyle is keeping an eye on possible catalysts such as Brexit and the upcoming U.S. presidential election.

In the meantime -- as currency volatility flirts with record lows -- Doyle is advising clients to keep hedges on, despite the somnolent state the market has been in this year.

“It’s what we don’t see and don’t talk about that might sneak up on us very quickly,” Doyle said. “The point is to protect your bottom line, not to speculate.”