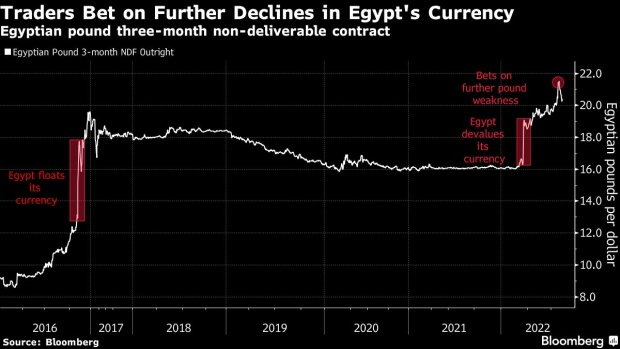 A customer selects Egyptian currency coins at the Al-Manhal market in the Nasr city district of Cairo, Egypt, on Wednesday, June 1, 2022. Global food prices are soaring near the fastest pace ever as Russia’s invasion of Ukraine chokes crop supplies, with Egypt, the world’s biggest wheat buyer, now grappling with higher import bills as the conflict causes a run-up in grain and energy costs. Photographer: Islam Safwat/Bloomberg , Bloomberg

Egypt became a prime destination for hot money by tethering its currency and boasting the world’s highest interest rates when adjusted for inflation.

But five months after Egypt devalued the pound, investors say policy makers would need to let it weaken further before they return, after pulling some $20 billion from the local debt market since the start of this year.

And in a surprise development on Wednesday, central bank Governor Tarek Amer resigned after an almost seven-year stint, leaving just a day before an interest-rate meeting. Though pressure built in recent days, the monetary authority has until now denied that a second wave of depreciation was even a possibility.

“They need to accept more currency weakness,” said Edwin Gutierrez, head of emerging-market sovereign debt at abrdn in London. “No one wants to enter with an incomplete FX adjustment.”

The dueling views reflect a fraught moment for Egypt.

Burned by the volatility of global capital flows, authorities have instead looked for investment and deposits from their wealthy Gulf allies, while questioning the reliance on the country’s once-lucrative carry trade.

Even so, Egypt needs to win back the confidence of investors as energy and food shocks from Russia’s invasion of Ukraine strain its finances. With external capital markets all but closed, the government is seeking a new loan from the International Monetary Fund, which favors a more flexible exchange rate.

Price pressures have already pushed the nation’s real rates below zero. Local bonds have lost 2.3% this month, making them the worst performer in emerging markets after Argentina’s debt, according to Bloomberg indexes.

With the central bank scheduled to convene on Thursday, now may be the time to act. Most economists surveyed by Bloomberg predict this year’s third rate hike.

Derivatives pricing “implies that investors have been getting ready for a sharp devaluation” at this week’s meeting, Gergely Urmossy, an emerging-market strategist at Societe Generale SA, wrote in a note.

So far, the central bank has been projecting a message of calm.

And in a sign that appetite for local assets is returning, foreign holdings of Egypt’s Treasury bills rose in June for the first time since at least February, according to the latest official data.

Here’s what’s at stake in Egypt, according to investors and analysts:

What sparked expectations for a weaker pound?

Egypt in March said it was turning to the IMF for new assistance. Speculation that the lender would demand more flexibility in the pound as part of the conditions attached to a new package helped push the currency toward a record low.

“The recent communication from the IMF hinted at a clear unhappiness with the lack of FX flexibility ahead of any potential new loan program,” said Paul Greer, a London-based money manager at Fidelity International, who is underweight on the Egyptian currency and local debt. “To that end, we are expecting the Egyptians to continue to weaken their currency.”

By how much does the pound need to weaken?

Views differ. The currency needs to fall about 23% to help the economy adjust and reduce Egypt’s funding gap, according to Bloomberg Economics.

The currency is about 10% overvalued, Deutsche Bank AG and Goldman Sachs Group Inc. argue, based on its real effective exchange rate. Citigroup Inc. has a lower estimate of 5%.

Despite a devaluation of more than 15% in March, the US dollar’s rally since then has weighed on the currencies of Egypt’s trading partners and other developing peers as the Federal Reserve raises interest rates.

Rather than anticipating that the pound will reach any specific levels, investors are looking for “just a movement in the right direction, which would give the IMF deal a push and also give investors confidence that the FX-rate bleed would start to be alleviated,” said abrdn’s Gutierrez.

Why is Egypt reluctant to devalue its currency?

While a weaker pound would help ease pressure on Egypt’s balance of payments and make the funding gap more manageable, it would also feed into higher inflation.

Egypt is likely to opt for a more gradual depreciation of the currency should an IMF deal include a commitment to more exchange-rate flexibility, according to Deutsche Bank.

“The Egyptian central bank is in a tough spot and faces a difficult trade-off,” Deutsche Bank Research’s Anna Friedmann and Christian Wietoska said in a report.

What will the central bank do?

Given the growing price pressures, the central bank will likely raise the deposit rate from 11.25% on Thursday to attract foreign capital and anchor inflation expectations, according to Deutsche Bank and Societe Generale.

Still, the central bank surprised most forecasters in June by keeping the benchmark unchanged after its biggest hike in nearly a half-decade the month before.

“They might be able to get away with keeping rates unchanged,” said Adriaan du Toit, London-based director of emerging market economic research at AllianceBernstein. “But I don’t think they’ll be able to hold onto the currency too.”