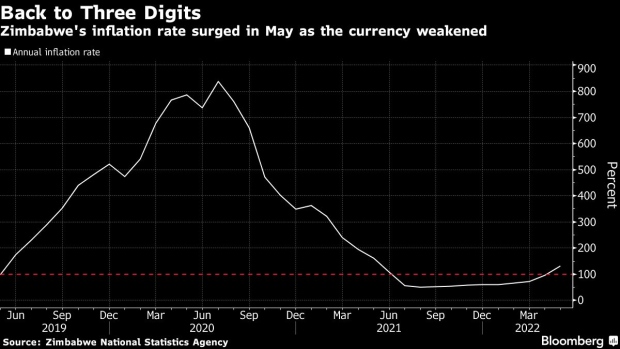 HARARE, ZIMBABWE - AUGUST 05: Street vendors sell goods in a market on August 05, 2018 in Harare, Zimbabwe. Zimbabwe Electoral Commission (ZEC) officials have announced the re-election of President Emmerson Mnangagwa of the ruling Zimbabwe African National Union - Patriotic Front (ZANU-PF). The election was the first since Robert Mugabe was ousted in a military coup last year, and featured a close race between Mnangagwa and opposition candidate Nelson Chamisa of the Movement for Democratic Change (MDC Alliance). Deadly clashes broke out earlier in the week following the release of parliamentary election results, amid allegations of fraud by Chamisa and MDC supporters. (Photo by Dan Kitwood/Getty Images) , Photographer: Dan Kitwood/Getty Images Europe

“We are instituting measures that every other country in the world is instituting,” Ncube said in an interview with Bloomberg Television’s Manus Cranny and Yousef Gamal El-Din from Davos on Thursday. “We are not in panic mode.”

Ncube attributed the surge in inflation, which is above 100% for the first time in 10 months, to rising prices of imported food, fuel and fertilizer and said the stronger dollar had affected the domestic currency. In 2008, a bout of hyperinflation led to the scrapping of the Zimbabwe dollar, which was only reintroduced in 2019. Inflation exceeded 800% in 2020.

The government this month temporarily banned all bank lending and introduced an interbank currency rate in a bid to stem a decline in the Zimbabwe dollar, which weakened to more than 400 to the greenback on the black market. That compares with the official rate of about 258. As recently as February 2019, a precursor to the Zimbabwe dollar was pegged at parity with the US currency.

“It was a necessary move to prick the speculative bubble,” Ncube said in a separate interview. “The parallel rate has taken a pause.”

The government is working with the African Development Bank and the World Bank to pay arrears on external debt. The state’s inability to make repayments has largely locked the nation out of global capital markets.

“We have got a strategy working with AfDB and World Bank to clear the arrears,” he said. That could involve working through a staff-monitored program to get a sponsor for bridging finance, appealing for debt forgiveness or finding the resources to repay the debt.

Zimbabwe has borrowed some money by using its gold and platinum resources to serve as security, Ncube said in the television interview. He declined to say who had loaned the country money.