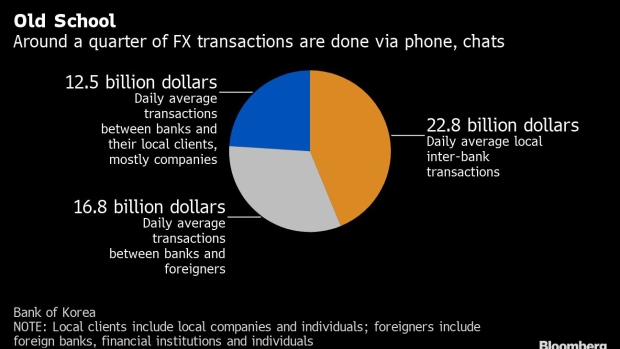 A foreign currency dealer speaks on a phone as other dealer wearing a protective mask walks inside a dealing room of Hana Bank in Seoul, South Korea, on Friday, Feb. 28, 2020. Fear tightened its grip on global markets Friday, with European stock futures tumbling 4% and U.S. contracts signaling yet more pain after the biggest one-day rout on Wall Street since 2011. Photographer: SeongJoon Cho/Bloomberg , Bloomberg

In a country known for cutting-edge Samsung devices and super-fast Internet connection, a chunk of its currency transactions are still done over the phone. Money brokers and the nation’s finance ministry are now looking at doing more by electronic trading due to the coronavirus pandemic.

KEB Hana Bank started its currency electronic trading platform in May, while Seoul Money Brokerage Services is pushing forward with a so-called application programming interface to share real-time data. The challenge now is to get other large banks to follow, which would then give companies and investors more pricing transparency.

“There is some debate in terms of how fast things should progress,” said Lee Seung Chul, the president of Korea Money Brokerage Corp., the nation’s largest money broker. But a new system “would probably help increase the size of the market, and in a bigger market, there will probably be more opportunities too.”

For trade-dependent South Korea, companies are constantly swapping currencies as they bring in earnings for their smart phones, home appliances and cars, while using dollars to buy raw materials and commodities. Yet, some $12.5 billion of foreign-exchange deals are still done daily via the phone and online chats.

“We have no idea what the best rate is on a real-time basis,” said Yoo Myung Yi, general manager of Bundang-based CrucialTec Co., a maker of optic components for mobile devices located southeast of Seoul. Unlike the big conglomerates which deal in large amounts of money daily, smaller firms might not be able to negotiate competitive rates, he said.

Yoo isn’t alone. At Earth Co., an exporter of electronic parts to Taiwan, Hong Kong and Japan, assistant manager Cho Seyeon said he relies on prices listed on the Internet.

“The fastest way to exchange money is by visiting the bank,” said Cho.

Bringing data together from multiple banks for better transparency, a common feature in developed markets, has been floated in South Korea for years. A mix of inertia and regulatory concerns over control should more transactions be done over electronic platforms have slowed reforms.

That’s changing, “as the pandemic bolstered demand for non face-to-face banking services, and as the global trend tilts further toward using electronic platforms that are deemed quicker and more transparent,” said Choi Ik-Sun, the general manager of the foreign-exchange broking department at Seoul Money Brokerage Services, which has the largest share of Korea’s currency spot market.

Proponents are also arguing that making real-time data available and moving to electronic trading would boost volume. Average daily spot transactions in Korea have hovered around $20 billion since 2015, while non-deliverable forwards rose about a third to $9 billion as offshore users migrated to electronic platforms.

The local Foreign Exchange Committee has collected views over introducing API in banks, and will hold an expert meeting after the Chuseok holidays, which spans Sept. 30 to Oct. 2, to discuss the issue in depth, according to Kim Kyung Ho, who heads up the group.

For some, the change can’t come fast enough. Jung Sung Ho, who runs global investment at DB Asset Management Co., is one of them.

“It is somewhat tiresome to reach out to three or four banks every time to ask for their bid and offer prices, then to compare the prices before placing the order,” said Jung.