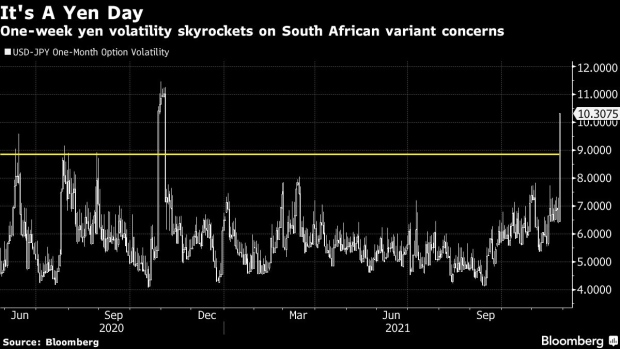 (Bloomberg) -- Volatility in developed-market currencies spiked by the most in a year as traders digest the impact of the new coronavirus variant discovered in South Africa.

Gauges of euro and yen volatility climbed the most since October 2020, a time when investors were girding for the U.S. presidential election.

Now, as U.S. traders get back to work following the Thanksgiving holiday, havens are ascendant amid worries about the virus mutation, with the Swiss franc and yen leading gains among Group-of-10 currencies. The dollar weakened.

“We’re really in a state of flux right now having little info about how governments will react to the new variant,” said Bipan Rai, head of foreign-exchange strategy at CIBC. “The immediate assumption is that this is a new pandemic, which means new restrictions, ergo risk-off.”

The new strain of the virus roiled markets as it carries a high number of mutations in its spike protein, the part of the virus targeted by vaccines. That’s already led several governments to tighten travel restrictions, despite the fact that researchers haven’t said whether it’s more contagious or lethal than others. Still, the discovery of the variant comes at a critical time in the global economic recovery as central bankers consider raising interest rates that they slashed at the onset of the pandemic.

Money-market bets on interest rates and how the new variant may derail growth will drive foreign-exchange price action until there’s more information, Rai said. For central banks in Canada and New Zealand, where hike wagers were “egregiously” priced in, the currencies may weaken as commodity prices also sink, he added.

The Bloomberg Dollar Spot Index, which got to the highest level since July 2020 earlier Friday, is down for the first time in six trading sessions. Yields on 10-year U.S. Treasuries fell as much as 15 basis points. The drop in rates comes just days after the reappointment of Federal Reserve Chairman Jerome Powell was interpreted as a harbinger of faster interest-rate hikes in the world’s largest economy.

“Medium-term, we expect the dollar to remain on the front foot, but a healthy correction may be needed before EUR/USD can plough beyond recent lows,” said Jane Foley, head of foreign-exchange strategy at Rabobank in London.

Friday’s risk-averse mood also helps explain the demand for so-called funding currencies like the yen and franc, according to Marc Chandler, global market strategist at Bannockburn Global. Low-yielding developed-world currencies continue to find buyers as investors exit positions on stocks and emerging-world assets -- from currencies to rates and credit.

“These currencies are used to fund other currencies,” Chandler said in an interview with Bloomberg Television. “So when equities and emerging markets go soft, people have to buy back those funding currencies.”