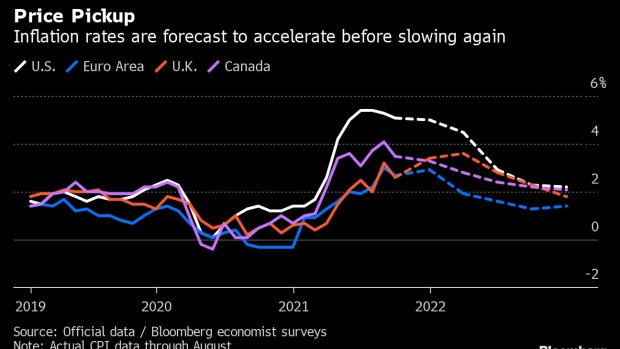 (Bloomberg) -- The surge in inflation seen across major economies is probably short lived because it’s confined to just a few sectors of the economy, according to the Bank for International Settlements.

New research by the BIS’s Claudio Borio, Piti Disyatat, Egon Zakrajsek and Dora Xia adds to one of the hottest debates in economics -- how long the current surge in consumer prices will last. Both Federal Reserve Chair Jerome Powell and his euro-area counterpart Christine Lagarde have said the pickup is probably transitory, despite a snarled global supply chain and a spike in energy prices.

The BIS team concluded that in a regime where officials are able to maintain price stability, “most of the fluctuations in headline inflation are due to price swings in finely defined expenditure categories rather than to generalized price movements.”

Borio, who currently heads the BIS’s monetary and economic department, has in the past advocated for higher interest rates to combat the buildup of asset price bubbles. That stance -- dubbed leaning against the wind -- has been vociferously criticized by some rate setters over the years.

“There will be higher inflation for some time, but that I don’t think will alter the fundamental picture” of it being transitory, Borio said. “Having said that of course, one should always remain vigilant.”

His study, published as part of the Basel-based institution’s quarterly report on Monday, also found that adjustments to a central bank’s monetary policy stance affected a narrow set of prices, chiefly in the service sector.

“This limits the ability of monetary policy to fine-tune inflation within a specified range,” they wrote. “Central banks can afford to be more tolerant of deviations from targets, which over time will tend to self-correct.”