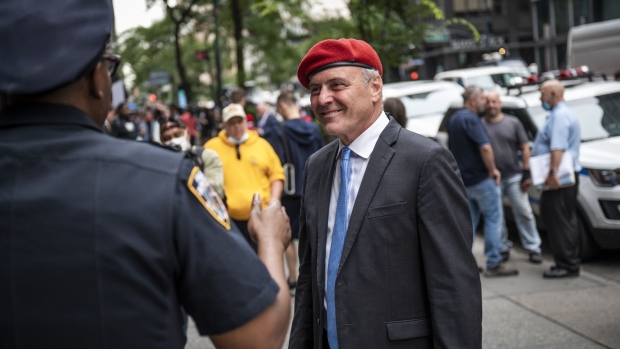 Although Democrats outnumber Republicans in the city by 7-to-1, Sliwa said he’s appealed to many of the city’s independent voters with his tough-on-crime campaign and promises to make the city property tax more equitable.

“Having the Independent Party line is another big plus,” said Sliwa in a Thursday interview with Bloomberg Television. “I don’t think that’s been factored into the polls.”

In an Emerson poll released Monday, Adams led Sliwa 70% to 30% among likely New York City voters. The poll, conducted Oct. 22-23, had a margin of error of plus or minus 3.9 percentage points. In the poll, respondents said crime was the primary issue they were concerned about in the city.

Sliwa, who said he was not a supporter of former President Donald Trump, said he didn’t trust the poll.

“I think the truth may be somewhere far in between,” said Sliwa, who founded the anti-crime group Guardian Angels in 1979.

Throughout his campaign, Sliwa has criticized the “Defund the Police” movement and the teaching of critical race theory in public schools. And he used unconventional approaches to garner outsize attention: He trekked to New Jersey to showcase a co-op Eric Adams co-owns with his partner in Fort Lee, New Jersey, capturing the trip on music video platform TikTok. He spent time patrolling and campaigning in city subways, which are struggling to recover from a plunge in ridership during the pandemic.

“My secret has been, as a Republican and Independent candidate, to go into neighborhoods where the only Republican they’ve ever seen is Abraham Lincoln on a five dollar bill,” he said. “These are areas predominantly Democrat but where I’ve been received well.”