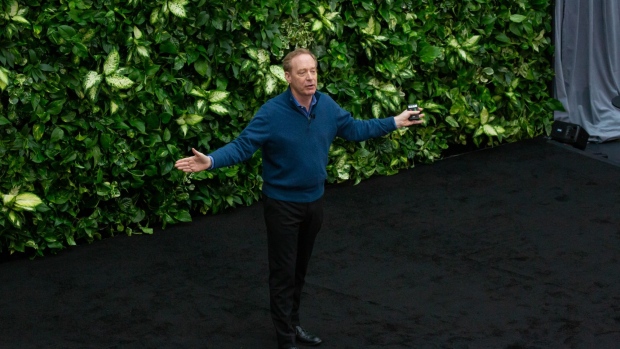 (Bloomberg) -- Everyone has seen the warning. At the bottom of the email, it says: “Please consider the environment before printing.” But for those who care about global warming, you might want to consider not writing so many emails in the first place.

More and more, people rely on their electronic mailboxes as a life organizer. Old emails, photos, and files from years past sit undisturbed, awaiting your search for a name, lost address, or maybe a photo of an old boyfriend. The problem is that all those messages require energy to preserve them. And despite the tech industry’s focus on renewables, the advent of streaming and artificial intelligence is only accelerating the amount of fossil fuels burned to keep data servers up, running, and cool.

Right now, data centers consume about 2% of the world’s electricity, but that’s expected to reach 8% by 2030. Moreover, only about 6% of all data ever created is in use today, according to research from Hewlett Packard Enterprise. That means that 94% is sitting in a vast “cyber landfill,” albeit one with a massive carbon footprint.

“It’s costing us the equivalent of maintaining the airline industry for data we don’t even use,” says Andrew Choi, a senior research analyst at Parnassus Investments, a $27 billion environmental, social, and governance firm in San Francisco.

Kirk Bresniker, chief architect of Hewlett Packard Labs, said these server farms use energy both to retain your data, and when you use it in some way.

“If I want to actually do something with my data, I have to warm it up and move it through the data center,” he says. And for those who think you’re erasing email when you empty the trash, you probably aren’t. Multiple copies of even decade-old emails are stored on servers around the world. And energy is being used to keep them alive.

The sum of all the world’s data in 2018 was 33 zettabytes (a zettabyte is 1 trillion gigabytes), but by 2025 it could increase fivefold, to 175 zettabytes, according to International Data Corp. Every day, the world produces about 2.5 quintillion bytes of data.

This is a sector “where emissions are increasingly getting out of control,” says Philippe Zaouati, chief executive officer of Paris-based Mirova, a $15 billion sustainable asset manager. “We need to decrease carbon emissions, and what we see in the IT sector is increasing emissions.”

Indeed, socially conscious investors have historically been attracted to tech stocks, based on the assumptions that it’s a low-emissions industry. Some are starting to rethink that.

Choi says the problem is getting too big too fast: How many photos are sitting untouched in the cloud? Is there a net benefit from an internet-connected toothbrush? Is an AI model that enables slightly faster food delivery really worth the energy cost? (Training an AI model emits about as much carbon as the lifetime emissions associated with running five cars.)

“Data is possibly overstated as an advantage for business, and no one’s really asking the question,” he says. “If a small group of people are the only ones really benefiting from this data revolution, then what are we actually doing, using all of this power?”

So far, the tech industry’s main response has been to buy more renewable energy—contracting for almost 6,000 megawatts of non-fossil fuel power last year, triple what it bought in 2017, according to BloombergNEF.

“Data-center need is moving so quickly that most companies can’t keep up,” says Kevin Hagen, vice president of ESG strategy at Iron Mountain, a data-center real estate company. Iron Mountain bought up so much renewable power last year that it started using it as a selling point, telling potential customers how much they could reduce their carbon footprint by using its servers.

But eventually there may not be enough renewable energy to satisfy the industry’s demand. Iron Mountain’s overall electricity use has been doubling from year to year, Hagen says.

Being aware of the problem may help focus more companies on the climate cost of electronic storage. Microsoft Corp. this month unveiled a first-of-its-kind sustainability calculator for its cloud customers so they can see the emissions generated by their data use.

“It’s a question customers were increasingly asking,” says Microsoft President and Chief Legal Officer Brad Smith. “I don’t think there’s much doubt in our minds about this as a decade-long, global phenomenon where we are going to see an inexorable rise in demand for technology.”BloombergNEF warns that energy efficiency upgrades or other technological improvements are unlikely to offset data’s greenhouse gas emissions, even if they are deployed quickly. Energy computing workloads are likely to more than double as more AI comes online, more devices are connected, and people do more work in the cloud.But no one seems to know how much fossil fuel energy is being used versus how much is being offset. Bresniker says the tech industry is “flying blind” when it comes to the true cost of storing data. The picture is clouded by a constant stream of efficiency and memory upgrades, increased renewable power, and AI aimed at data-center efficiency.

“We don’t really understand what the footprint is,” he says.