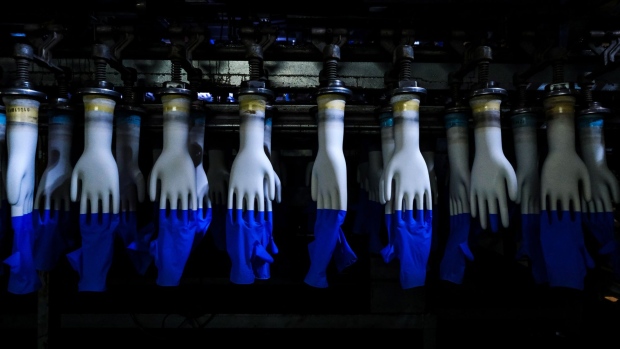 Latex gloves on hand-shaped molds move along an automated production line at a Top Glove Corp. factory in Setia Alam, Selangor, Malaysia, on Tuesday, Feb. 18, 2020. The world’s biggest glovemaker got a vote of confidence from investors in the credit market, as the coronavirus fuels demand for the Malaysian company’s rubber products. The World Health Organization is taking an unprecedented step of negotiating directly with suppliers to improve access to gloves, face masks and other forms of protective equipment. Photographer: Samsul Said/Bloomberg , Bloomberg

(Bloomberg) -- CVC Capital Partners has been exploring a bid for U.K. chemical producer Synthomer Plc, people with knowledge of the matter said.

The private equity firm made an initial approach to London-listed Synthomer to gauge its interest in a deal, according to the people, who asked not to be identified because the information is private. The two parties aren’t currently holding any negotiations, one of the people said.

Shares of Synthomer have risen 46% over the past 12 months, giving it a market value of about 2 billion pounds ($2.8 billion). The company is one of the world’s largest suppliers of latex for medical gloves, which have seen booming demand during the coronavirus pandemic. Synthomer also produces materials used in specialty packaging tape, artificial sports turf, bedding foam and paint.

A sale of Synthomer would add to the $3.1 billion of chemical deals involving European companies in 2021, a figure that’s already up 74% from a year earlier, data compiled by Bloomberg show. Deliberations are ongoing, and there’s no certainty they will lead to a transaction, according to the people.

Synthomer said last month that Chief Executive Officer Calum MacLean will step down from his role by January 2022. MacLean has been in charge since 2015, overseeing a business that employs about 4,750 people globally, according to its website.