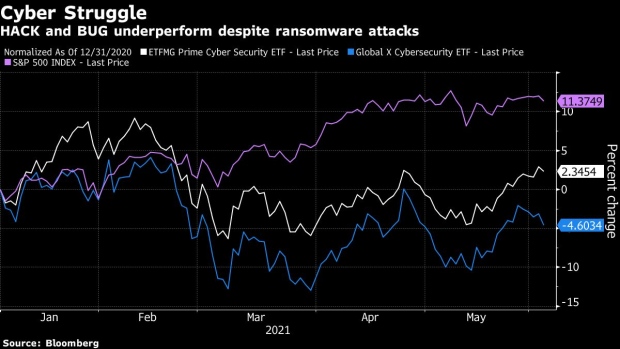 (Bloomberg) -- Cybersecurity-focused ETFs are struggling to capitalize on a slew of high-profile hacks that have prompted the White House to urge every U.S. company to beef up security measures.

The $2.2 billion ETFMG Prime Cyber Security exchange-traded fund (HACK) and the Global X’s Cybersecurity ETF (BUG) have seen little in the way of inflows. The former notched just $13 million in May after two straight months of outflows, according to data compiled by Bloomberg.

“Especially after the pipeline, hackers are a clear and present danger, and yet it is getting little to no real attention,” said James Pillow, managing director at Moors & Cabot Inc. “Most of the proverbial oxygen in the room is being absorbed by meme stocks and crypto.”

Bitcoin has surged almost 25% this year amid intense market volatility, and beloved retail favorite AMC Entertainment Holdings Inc. has surged about 2,000%, compared with an advance of 12% for the S&P 500. HACK has risen nearly 2% in the span, while BUG is down 5%.

The cyber funds’ heavy positioning in growth companies and speculative tech names has weighed on them, according to Mohit Bajaj, director of ETFs at WallachBeth Capital.

“Both funds have underperformed the broader markets all year long, so that is possibly one of the reasons why we haven’t seen as many inflows as of late,” he said.

Two of the largest holdings in BUG are security-software companies Zscaler Inc. and Check Point Software Technologies Ltd., which have dropped 8% and 11% in 2021, respectively. Meanwhile, HACK currently counts BlackBerry Ltd. -- another meme stock favorite -- as its biggest holding. The stock has more than doubled this year.

The increased attention to cybersecurity issues, including the White House’s directive for firms to expand their protections, could have a longer-term benefit to the funds, even if they’re not currently in favor.

“Cybersecurity is an area that has a lot of potential in the next decade or so,” said Frank Lee, managing director of the investment strategy group at Miracle Mile Advisors. “It just goes back to time horizon -- if you’re looking out at the next five or 10 years, it’s a great time to get into it.”