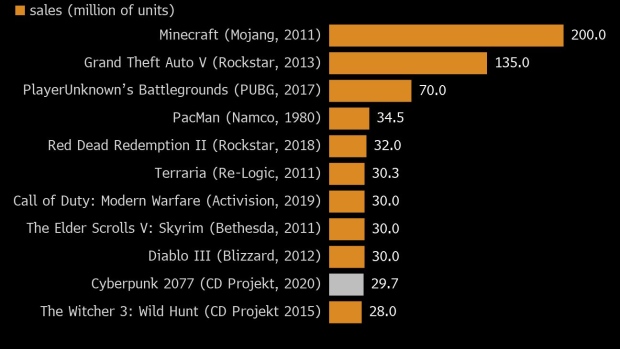 (Bloomberg) -- Numerous glitches reported by players as the long-awaited Cyberpunk 2077 game went live robbed creator CD Projekt SA of a stock surge on the back of encouraging advance-order sales figures.

Poland’s biggest computer-games studio sold more than eight million copies of the futuristic title prior to its official release, mainly using higher-margin digital distribution. Excitement around Wednesday’s launch saw player numbers peak at more than one million, the most ever for a premier night on the Steam platform, and an industry record for a single-player production. Less positively, in excess of 17,000 Steam users gave Cyberpunk a rating of just 71%, with their complaints of bugs in the game pushing CD Projekt’s shares as much as 7.5% lower.

Before the release, Cyberpunk’s average rating was 91% on Metacritic, a website that aggregated journalists reviews. That less-than-perfect verdict also weighed on the stock earlier this week, paring its gains of almost 60% in 2020 as of last Friday. The stakes are high for CD Projekt as, after eight years of developing Cyberpunk, the game is the studio’s only new franchise. The company said Thursday it’s already working on fixes and is confident they will be resolved and that it wants to publish initial sales data before Christmas.

“We are super happy with the number of pre-orders, which is one of the highest in the gaming universe, ” Marcin Iwinski, company co-founder and deputy chief executive officer, said in a Bloomberg TV interview. “It’s a very crucial moment for us. We are looking at real-time gamers’ feedback and seeing if there are any repetitive problems and what should be fixed.”

Most analysts regarded the pre-order data as strong and corresponding with earlier market expectations for sales of 30 million of copies in the next 12 months, provided the studio is able to address technical issues. “Cyberpunk 2077 looks like a big hit and with more bug fixing it should be positively received by users,” Vladimir Bespalov, an analyst at VTB Capital, said by email.

Bloomberg Intelligence analyst Matthew Kanterman said the robust pre-orders show that Cyberpunk could be well on its way to matching Red Dead Redemption 2’s 2018 record of 17 million units sold within the first two weeks, which may be enough to meet consensus views for the year. The studio’s previous hit, The Witcher 3, sold 1.5 million copies before its launch in 2015, going on to extend that number to 28 million.

Some analysts see plenty of hard work ahead for CD Projekt’s programmers and graphic designers if the studio is to achieve the full potential of its new game.

“Momentum at the start was strong, but they need to fix the issues,” Neil Campling, an analyst at Mirabaud Securities, said in an email. “The game has taken CD Projekt eight years to release and it is still buggy. Now they have to use resources to improve the current gameplay rather than moving on to an online, multiplayer version. We could end up in a vacuum of time before it comes out. The risk-reward is now to the downside.”