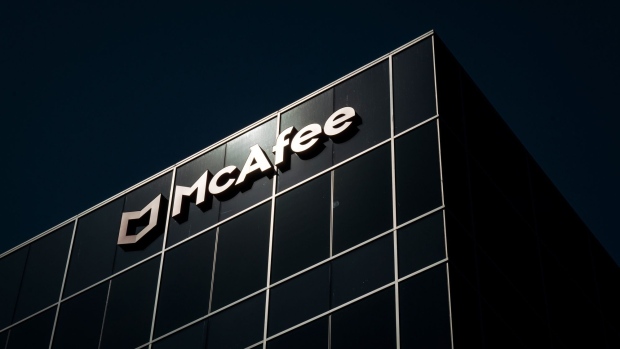 McAfee Corp. shares fell 6.5 per cent in their trading debut after a US$740 million initial public offering in a muted return to the public markets after a decade.

The cybersecurity software starting trading Thursday at US$18.60, below its US$20 IPO price. The shares never rose above US$19.50 and closed at US$18.70, giving it a market value of about $8.1 billion based on the outstanding shares listed in its filings. McAfee and its existing investors sold 37 million shares after marketing them for US$19 to US$22 each.

McAfee Chief Executive Officer Peter Leav said in a phone interview that the company now sees 8,600 threats every minute as well as a 70 per centincrease in mobile malware attempted attacks. The Covid-19 pandemic has also led to more cybercrime, with employees around the world working from home on often less-secure networks.

“Unfortunately what’s happening in the world is also benefiting the cyber criminals,” Leav said. “Cyber criminals are not just doing the traditional phishing expeditions, they’re using Covid as a lure.”

Software IPOs are one of the biggest and best-performing segments on U.S. exchanges this year. Excluding McAfee, they have accounted for 11 per cent of the US$128 billion raised and have climbed 90 per cent from their offer prices on a weighted average basis, according to data compiled by Bloomberg. That compares to an average increase of 56 per cent for all other listings, excluding special purpose acquisition companies, or SPACs.

Enterprise software maker Snowflake Inc., which raised US$3.86 billion including so-called greenshoe shares in September, is the biggest U.S. IPO this year for a company other than a SPAC. It also had one of the best trading debuts of 2020, rising 112 per cent on its first day.

McAfee’s lackluster debut was proceeded by that of Datto Holding Corp., which gained only 0.4 per cent in its trading debut Wednesday after raising US$594 million.

Based in San Jose, California, McAfee was acquired by Intel Corp. in a 2010 deal. In 2016, Intel announced that it had signed an agreement to transfer a 51 per cent stake in McAfee to the investment firm TPG for US$1.1 billion. The transaction valued the spun-off company at US$4.2 billion, including debt.