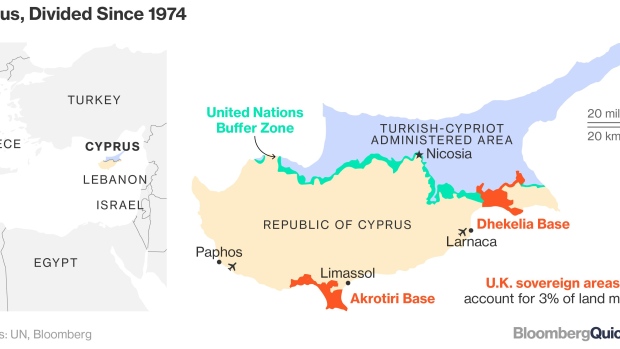 Ioannis Kasoulides, Cyprus' foreign minister, during a Bloomberg Television interview in New York, US, on Monday, Sept. 26, 2022. Kasoulides said that Cyprus's relation with Russia isn't the same as in the past. , Bloomberg

(Bloomberg) -- Cyprus is wary of getting drawn into a potential conflict between Greece and Turkey as rhetoric between the countries intensifies, Cypriot Foreign Minister Ioannis Kasoulides said.

“We fear that any conflict in the Aegean Sea will affect us directly because we’ll be used as the weakest point in the whole story,” Kasoulides said Monday in an interview with Bloomberg TV.

Ahead of elections next year, President Recep Tayyip Erdogan has stepped up criticism of what Ankara claims is a growing Greek military buildup on Aegean islands, known as the Dodecanese, close to the Turkish coast, as well as Western military support of Athens.

On Monday, the Turkish leader vowed to use whatever means necessary to defend Turkey’s interests in its dispute with Greece, and the country’s foreign ministry summoned the Greek ambassador.

“Listening to Mr. Erdogan pretending that he is under threat from Greece I would qualify it as preposterous and ludicrous,” Kasoulides said. “It is he who threatens, he who has a revisionism policy.”

Cyprus -- less than half the size of New Jersey -- was effectively partitioned in 1963 when fighting erupted between Greek and Turkish Cypriots. It was fully divided in 1974 after Turkey intervened, capturing the northern third of the island, following a coup by supporters backed by the Greek military junta then ruling in Athens.

The Turkish Republic of Northern Cyprus is still recognized only by Turkey. While the Republic of Cyprus, which is a member of the European Union, officially has sovereignty over the entire island, it is only able to govern in the south. Unification efforts have stalled.

Tensions escalated in 2020 as Turkey started searching for oil and gas in contested waters of the eastern Mediterranean. The region has yielded substantial natural gas discoveries in recent years for Israel, Egypt and Cyprus.

Russia’s war in Ukraine has increased the stakes and created additional strains. The US lifted defense trade restrictions on Cyprus for the fiscal year 2023. Turkey criticized the move, warning that it may lead to an arms race on the island.

The lifting of the restrictions comes with conditions including a ban on Russian ships refueling in Cypriot ports. The EU’s sanctions also raise concerns about historically close ties to Moscow.

“Our relations with Russia have changed, but I hope not forever,” Kasoulides said. “Our positions could not be other than allying with our partners in the EU and US.”