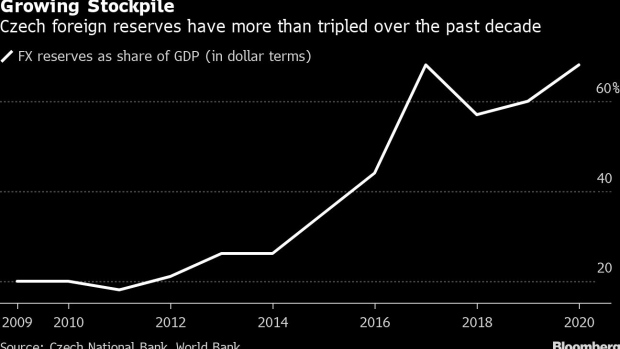 (Bloomberg) -- Investors weary of the Czech Republic’s shallow and crowded currency market just got a glimpse of hope from the country’s policy makers.

The central bank said Thursday that after nine years, it will resume sales of at least some of the income it earns on its vast foreign-currency reserves. The program will be restarted in January, and the bank wants to manage it a way that will have “minimal” impact on the koruna.

The koruna pared some of its intraday losses after the announcement, but it remains under pressure alongside other emerging-market currencies in Europe.

The Czech National Bank built some of the world’s largest reserves relative to the size of the economy during its 2013-2017 shift to a Swiss-style regime of capping koruna gains. It invests the reserves, which totaled an equivalent of $170 billion at the ed of September, and any profit makes the the pile bigger.

At the same time, the flood of koruna liquidity created by the interventions limits the currency’s gains, making it harder for investors to exit their long positions with a profit and boosting the need for interest-rate hikes to control persistent inflation.

The bank has been discussing resuming the FX program for several weeks, even as Governor Jiri Rusnok said last month that no decision was imminent.

Central bankers have presented the sales as a way to gradually curb growth of the bank’s balance sheet. Speaking in a hypothetical manner one day before the announcement, rate setter Tomas Holub said such program wouldn’t serve as a monetary-policy or currency-management tool.

But it could bring some fresh demand for the koruna and facilitate at least modest appreciation over the coming years.

“I wouldn’t mind if it had the side effect of unblocking the exchange-rate channel, but in my view it wouldn’t be the primary goal of the program.”