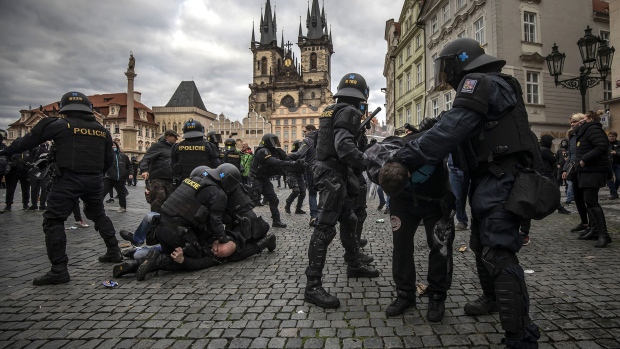 Hundreds of protesters clashed with riot police in Prague in a protest against social distancing rules and government measures such as wearing face-masks to stem the most acute spread of the coronavirus in Europe.

The police used tear gas, water cannon and an armored personnel carrier to disperse the crowd of some 2,000 protesters, which assembled at the city’s Old Town Square.

Some people, mostly hockey and football fans, refused to leave after the authorities ended the demonstration and used small explosive devices against the officers. Some 100 people were arrested after the protests and 20 people were injured, according to CTK newswire.

The rally was legal on the conditions that there wouldn’t be more than 500 people and that protesters followed social distancing rules and wore face-masks.

The protesters who violated the government rules should be punished “harshly,” Czech Prime Minister Andrej Babis said in a Facebook post. In a separate post, he urged people to stay at home as much as possible as the next week will be key in the nation’s fight against the renewed outbreak.

The Czech Republic, which was one of the most successful European countries in handling the pandemic in the spring, is now facing the continent’s worst spread of Covid-19. The government shut schools, restaurants and bars and mandated face masks in public spaces.