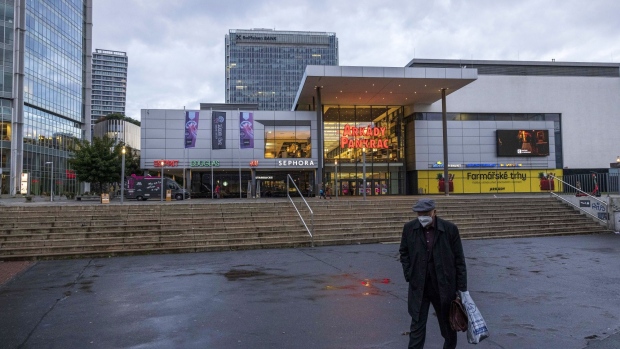 The Arkady Pankrac shopping center in Prague, Czech Republic, on Tuesday, Oct. 12, 2021. Czech President Milos Zeman was rushed to the hospital over complications related to his chronic health problems, a development that may snarl government negotiations after his ally suffered a shock election defeat. Photographer: Milan Jaros/Bloomberg , Bloomberg

(Bloomberg) -- The Czech government is considering several options of stricter rules for people who aren’t vaccinated against Covid-19, ranging from harsh steps to only a mild tightening of measures, according to outgoing Prime Minister Andrej Babis.

One of the alternatives is a similar regime to the one imposed in neighboring Austria, which limits the movement and activities of those who have refused inoculation, Babis told a televised news conference after a government meeting on Monday. Some cabinet members are advocating softer steps, such as no longer accepting antigen tests for sporting and cultural events or restaurant visits.

The government will meet again on Thursday to debate new measures as it tries to slow the spread of the coronavirus. As in many countries in Europe, new cases and hospitalizations are rising again in the Czech Republic, which suffered one of the deadliest outbreaks in the world this spring.