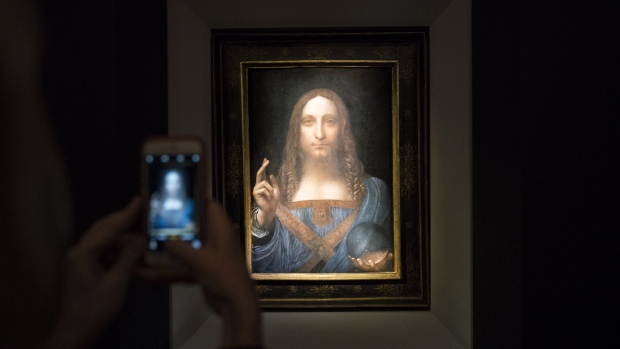 A Leonardo Da Vinci masterpiece, whose whereabouts has been a mystery since it sold in 2017 for a record US$450 million, has turned up in an unlikely place, according to Artnet.com.

“Salvator Mundi” is being kept on superyacht Serene owned by Saudi Crown Prince Mohammed Bin Salman, the publication reported Monday, citing two “principals involved in the transaction” that it didn’t identify. Another Saudi prince was said to have purchased the 500-year-old painting on MBS’s behalf at a 2017 Christie’s auction, the New York Times reported previously. Christie’s declined to confirm that report.

The Saudi government’s Center for International Communication didn’t immediately respond to a request for comment.

The yacht’s location as of May 26 was in the Red Sea off Sharm el-Sheikh, an Egyptian resort town on the Sinai Peninsula, according to Bloomberg ship tracking data.

While the high seas may not be the best place for a fragile Old Master painting, it’s not uncommon for the super-wealthy to decorate their yachts with trophy art. Joe Lewis hung Francis Bacon’s “Triptych 1974 - 1977,” worth an estimated US$70 million, on the lower deck of his yacht, the Aviva.

‘‘Salvator Mundi,” whose provenance has been questioned, will remain aboard MBS’s 439-foot Serene until the Saudis create a planned cultural hub in the Kingdom’s Al-Ula region, Artnet said. The project was in an “exploratory phase,” a spokesman for the commission overseeing the plan said in December.

Experts at the Louvre have attributed the work to Da Vinci’s workshop, rather than to the artist alone, according to a published report. Celine Dauvergne, a spokeswoman for the Louvre, declined to comment on the painting’s attribution, but said the Paris museum has asked to borrow the work for an October exhibition.