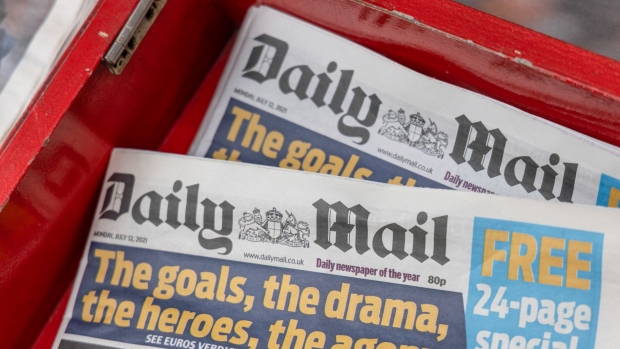 Copies of the Daily Mail newspaper on display outside a newsagent in London, U.K., on Monday, July 12, 2021. The Rothermere family is weighing a plan that could break up the owner of Britain's Daily Mail newspaper and take it private, following an approach for the companys insurance and risk division. , Bloomberg

Daily Mail owner Lord Rothermere is on the verge of taking the newspaper private after closing in on a deal with its pension funds.

Daily Mail & General Trust Plc and controlling shareholder Rothermere Continuation Ltd. are “close to agreeing a deal with the trustees” of DMGT’s three pension funds, the company said in a statement Tuesday. It would include an injection of about 400 million pounds ($545 million).

Signing the pension pact would be the final piece in a complex takeover plan unveiled in July by Rothermere and DMGT. The path to a de-listing has seen the London-based media group sell its insurance and risk unit RMS to Moody’s Corp. in August for $2 billion, and the listing of its stake in online car retailer Cazoo via a U.S. blank-check company.

If the plan is successful, shareholders will be paid a special dividend in Cazoo shares and cash, implying an enterprise value of 810 million pounds for the remaining DMGT business. To see the talks through, the companies have consented to extend the U.K. takeover deadline multiple times.

Rothermere is the aristocratic name of Jonathan Harmsworth, who chairs the business. His family’s trust owns about 30% of its overall stock and all of its voting shares in a dual-class structure. Its best-known business is the Daily Mail newspaper, founded by Harmsworth’s family in 1896.