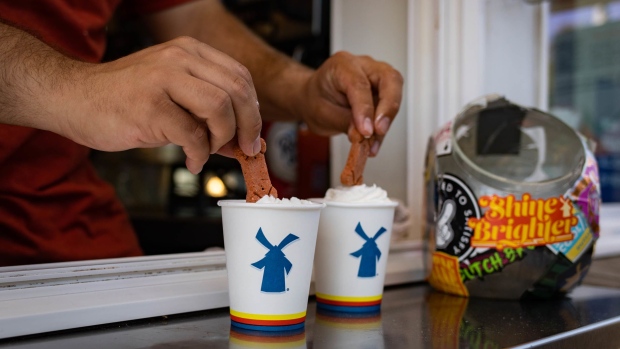 (Bloomberg) -- When third-generation dairy farmers Dane and Travis Boersma were looking for something to do outside the family business, they decided to try coffee. Not only could they make a little money, they’d be able to hang out with friends and listen to music.

They pooled their savings to buy a coffee cart and an espresso machine and began selling in downtown Grants Pass, Oregon, in the early 1990s. Pretty soon they had five carts.

After losing his older brother Dane in 2009 to amyotrophic lateral sclerosis -- also known as Lou Gehrig’s Disease -- Travis continued building the business. Dutch Bros Inc. now has 471 shops across the Western U.S. with sales of more than $400 million a year.

The company begins trading Wednesday on the New York Stock Exchange under ticker BROS, valued at $3.8 billion at its $23 offering price. Boersma, 50, is the company’s largest shareholder with a stake worth $1.6 billion, according to the Bloomberg Billionaires Index.

Dutch Bros declined to comment on the size of Boersma’s holding.

With competitors like Starbucks Corp, Dunkin’ and Peet’s Coffee & Tea Inc., the U.S. coffee market would seem to be a tough business to break into. Still, Dutch Bros carved out a niche with a culture it calls “Dutch Luv.” At the company’s stores -- all drive-thru -- its “broistas” sell more cold drinks than hot, such as the chocolate macadamia-flavored “Annihilator” and the “9-1-1,” which combines six shots of espresso with half-and-half and Irish cream syrup.

Employee satisfaction and advancement are a key company focus, according to the prospectus. The annual turnover rate among Dutch Bros’s hourly employees is 40%, compared with the industry average of more than 100%, according to Bloomberg Intelligence analyst Michael Halen.

“It’s very difficult to hire in the restaurant industry right now,” Halen said, because of the tight labor market. “Retaining your employees helps a lot.”

It also makes for a better customer experience. “You have experienced employees committed to the brand and making a career out of this,” he said.

Boersma stepped down as chief executive officer in February, when veteran beverage-industry executive Joth Ricci took over the role. Boersma continues to be executive chairman.

Private equity group TSG Consumer Partners originally invested in Dutch Bros in 2018, and will continue to own more than 65 million shares after the IPO, making it the second-largest shareholder after Boersma.