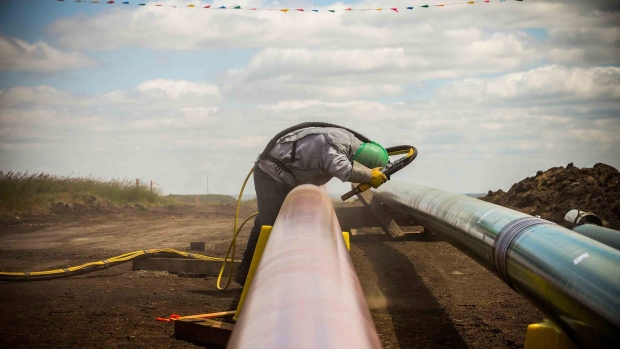 WILLISTON, ND - JULY 25: A construction worker specializing in pipe-laying sandblasts a section of pipeline on July 25, 2013 outside Watford City, North Dakota. North Dakota is currently experiencing an oil boom, creating thousands of jobs throughout the state and billions of dollars in new state revenue. Local two-lane roads that are used to access drill sites have taken a beating due to the unprecedented amount of traffic. Pipelines are being constructed across the state in part to streamline the movement of oil from drill sites to train depots and oil refineries. (Photo by Andrew Burton/Getty Images) Photographer: Andrew Burton/Getty Images North America , Getty Images

(Bloomberg) -- The Dakota Access oil pipeline is poised to stay in service at least through December under a new court schedule, assuming the Trump administration doesn’t force a shutdown.

Under the proposed briefing schedule filed Wednesday, a federal court in Washington won’t be prepared to rule until late December, at the earliest, on a renewed bid to halt the line.

The proposed schedule would give tribes opposed to the Dakota Access until Oct. 16 to file a new request to shutter it. Lawyers for the Army Corps of Engineers and pipeline operator Energy Transfer LP would have until Nov. 20 to respond, and the tribes would have until Dec. 18 for final briefs.

The Army Corps is still reviewing whether it should order removal of the pipeline after the court scrapped a federal easement for the line, which delivers crude oil from North Dakota shale fields to an Illinois hub.