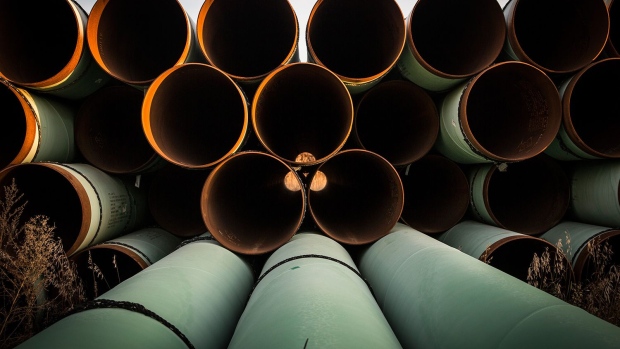 The Dakota Access oil pipeline again staved off what would have been an unprecedented shutdown, with judges ruling that the Trump administration has to decide whether the conduit can operate while a more robust review is done.

Judges said Wednesday that they expect the U.S. Army Corps of Engineers to clarify in front of a federal district court whether the agency thinks the pipeline must shut after a key permit was vacated in July. The decision from the U.S. Court of Appeals for the District of Columbia Circuit buys pipeline operator Energy Transfer LP some time after the July 6 shutdown order rocked the industry.

“Despite the mixed decision from the circuit court, the impact is wholly positive for the pipeline,” said Bloomberg Intelligence analyst Brandon Barnes. Still, the decision leaves open the possibility that Dakota Access has to shut before an appeal is decided, he said.

Although Energy Transfer units rose on the initial decision Wednesday, they tumbled 7.6 per cent on Thursday in response to the company’s reduction in adjusted earnings guidance for the year. General Counsel Tom Mason said during a conference call that the company was reviewing the court decision and will “run the course” with its Dakota Access litigation.

“We believe our legal positions are strong, and we are confident that the pipeline will continue to operate,” Mason said.

The Army Corps is likely to allow the pipeline to continue operating, according to James W. Coleman, a professor at Southern Methodist University’s Dedman School of Law. The question is then whether the Corps’ decision holds up to scrutiny from the district court.

“The bad news for the pipeline is that, if the district court orders a shutdown after considering the injunction standard, the same panel of three judges will hear a new request for a stay,” Coleman said. So far, they seem inclined to agree with the district court on the need for more environmental review, he said.

The oil industry has been watching the Dakota Access case with bated breath. Pipeline operators and developers are increasingly losing legal battles over key permits, but the Dakota Access order marked the first time a federal court told a major crude pipeline to shut due to violations of the National Environmental Policy Act.

Dakota Access has been in service for three years after drawing months of on-the-ground protests during its construction near the Standing Rock Indian Reservation. The district court’s July decision said the Army Corps of Engineers violated NEPA when it approved a key permit for the pipeline, ordering the project to shut down while the agency conducts a more robust review.

Energy Transfer, led by billionaire Kelcy Warren, said the judge didn’t have the authority to shut the pipeline and that the company would continue to accept capacity reservations beyond when the conduit was supposed to be drained. A week later, the D.C. Circuit issued a temporary stay of that order, allowing the line to keep operating.

The company had also sought a more permanent stay, which the appeals court declined to grant on Wednesday.

“It’s interesting what the court did here,” said Earthjustice lawyer Jan Hasselman, who represents the Standing Rock Sioux Tribe against Dakota Access. “While the focus has been on this judicially imposed shutdown order, the bigger picture is the environmental impact statement and whether a permit will be reissued under the next administration.”