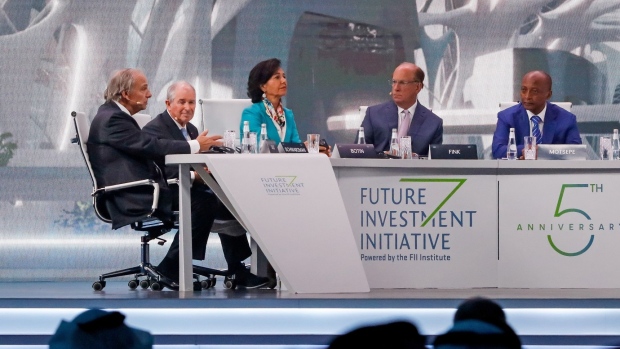 (Bloomberg) -- U.S. billionaires Ray Dalio and Larry Fink say they’re open to paying more tax -- but only if the money was put to good use.

“I would support anything that is going to have the effect of being spent on increasing, creating equal opportunity and greater productivity,” Dalio, the founder of hedge fund Bridgewater Associates, said at Saudi Arabia’s flagship investment conference. “If it accomplishes those things, I would support it. I’m not sure that it does.”

The wide-ranging discussion touched on plans drawn up by Democratic lawmakers, with President Joe Biden’s support, to tax ultra-high earners. The proposal would set the so-called billionaires’ income tax at $1 billion in assets, or three consecutive years of $100 million or more in income, which would hit some 700 taxpayers.

Goldman Sachs Group Inc. Chief Executive Officer David Solomon said he shares Dalio’s view, although he didn’t specifically address the proposed tax. It’s important to consider “how we’re taxing, what incentives it creates to make advancement. I think you can’t answer the question in a black and white way, it depends on what you’re spending it on,” he said during the opening panel of the Future Investment Initiative, or FII.

Fink, the chief executive officer of BlackRock Inc., said he pays a tax rate of about 55% because he’s based in New York City.

“If we could find solutions where the money could be directed in a proper way, I have more to give,” Fink said. “I think when we talk about taxes, we always just think about it at the federal level. I’m not even sure where that money is well spent now.”