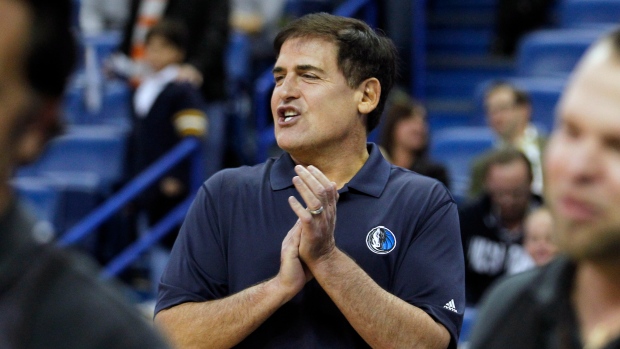 Dallas Mavericks owner Mark Cuban applauds his team at the start of an NBA basketball game against the New Orleans Pelicans in New Orleans, Saturday, Nov. 1, 2014. , The Canadian Press

The Dallas Mavericks are getting on the cryptocurrency bandwagon.

Mavericks owner and tech entrepreneur Mark Cuban tweeted “next season” after a Twitter user asked him Tuesday when fans of the National Basketball Association team would be able to purchase tickets with Bitcoin.

"True," Cuban answered to an emailed question from Bloomberg News on whether the team would accept Bitcoin payments. "And we will be taking Ether as well. As far as tokens, we will be taking tokens originated by companies we have business relationships."

Cuban, who had tweeted in June that Bitcoin is in a bubble, ended up investing in the cryptocurrency later in 2017. The billionaire star of the investor-themed reality show “Shark Tank” also backed blockchain fund 1confirmation and invested in digital tokens sold by his portfolio company Unikrn.