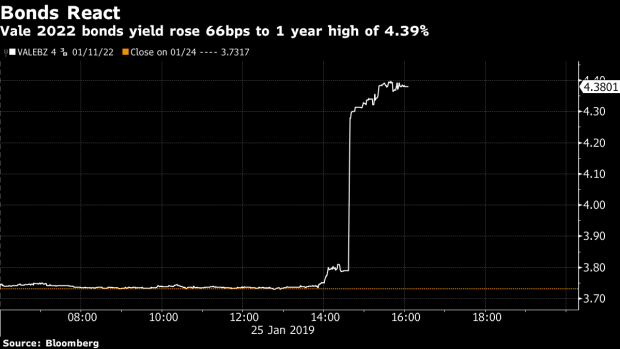 (Bloomberg) -- A tailings dam owned by miner Vale SA broke in the state of Minas Gerais on Friday, hitting a local community near the capital and echoing a similar accident that became Brazil’s biggest environmental disaster three years ago.

Helicopter footage from local television showed several buildings leveled by a slide of mining waste, and a sea of mud blocking a local road. The state of Minas Gerais has formed a crisis management group and sent first responders to the affected area, according to a statement. Two helicopters are doing flyovers as part of rescue operations, it said, without mentioning any deaths or injuries.

President Jair Bolsonaro intends to visit the disaster zone on Saturday, according to a spokesman. Earlier, the president said he had sent a team of high-ranking officials to the area, including the ministers of environment, and mines and energy. “Our biggest concern at the moment is to attend to possible victims of this serious tragedy,” he posted on his twitter account.

In an emailed statement, Vale said there are possible victims among employees who were at an administrative facility hit by the mud. It added there’s no information about the cause of the accident.

The failed dam was part of the Feijao project, one of Vale’s smaller operations that produced 7.8 million tons of iron ore in 2017, according to the company.

In Brazil’s largest-ever environmental catastrophe, another tailings dam collapsed in the municipality of Mariana, some 40 miles off Belo Horizonte, in November 2015. It spilled the equivalent of 25,000 Olympic swimming pools of toxic mud that destroyed entire towns, contaminated a nearby river and resulted in 19 deaths. The dam was owned by Samarco, a joint-venture between Vale and BHP Billiton Ltd.

Samarco’s inability to restart operations after more than three years doesn’t bode well for the Feijao mine’s future, which belongs to a bigger system of Vale-operated mines, which may also come under greater scrutiny in the wake of Friday’s spill. The 2015 spill came at a time when Vale and other major iron ore miners sought to increase production and squeeze out competition.

Vale’s reliance on its mines in Minas Gerais has dwindled in recent years as it focuses on its lower-cost, high-grade reserves situated in the Amazon rainforest. The Rio de Janeiro-based company has not even finished ramping up its crown jewel project there, known as S11D, and already has plans to expand upon the original planned capacity.

Brumadinho’s dam is smaller than Mariana’s, suggesting a lower volume leaked, but the environmental and human impact is still unknown, said Luiz Jardim, a scholar at the State University of Rio de Janeiro who specializes in mining.

“The dam’s size represents the volume dumped, which gives a magnitude of the disaster,” Jardim said by phone from Rio. “But until the mud doesn’t stop leaking it’s hard to estimate the effects.”

A boost in production levels by companies to compensate for the decrease in iron ore prices in recent years has been contributing to environmental disasters, resulting in accidents such as that of Mariana, according to Jardim.

To contact the reporter on this story: R.T. Watson in Rio de Janeiro at rwatson71@bloomberg.net