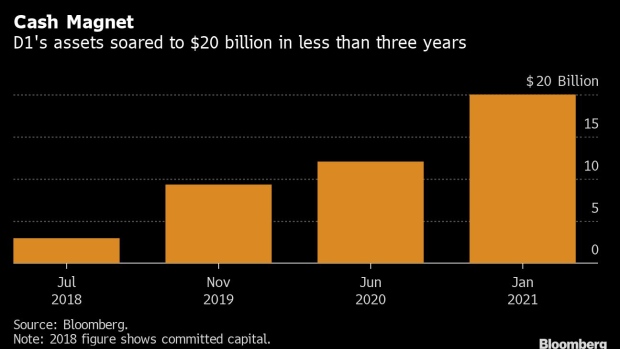 (Bloomberg) -- It was the kind of moment that would normally sink a hedge fund: Dan Sundheim was on Zoom, apologizing to clients for losing $4 billion in a single month. He ticked off strategy changes, noted he wasn’t going to dock his team’s pay and then headed back to work.

Now, mere weeks later, the episode is behind him.

Sundheim has recouped about 90% of what he lost in January when retail investors attacked his short bets on the likes of GameStop Corp. That recovery has put his D1 Capital Partners back into one of the most rapid ascents ever seen in money management. His presentation that February day fit what investors have come to expect from the 44-year-old billionaire -- unemotional yet sincere, supportive of his 51-member team, and unfazed by risk -- attributes they say helped him amass $20 billion in less than three years since setting up shop.

Sundheim, who’s posted annualized returns of nearly 30%, is among stock pickers helping to reanimate an industry hit by client defections over mediocre returns. He tends to take concentrated positions on both the long and short side, and he often gravitates to the intersection of technology and consumers, including Facebook Inc., Netflix Inc. and JD.com. Among peers, he’s especially active in betting on startups years before their public stock listings.

Other money managers privately wonder why he bothered to short sub-$20 stocks like GameStop or AMC Entertainment Holdings Inc. that were then driven up by retail investors on Reddit early this year, blowing up wagers that the stocks would fall. But his clients are unperturbed, saying anyone who can make 10% or more in a month should also be expected to lose big on occasion.

D1 has been able to attract so much money so quickly because of Sundheim’s previous job working at top-performing Viking Global Investors. He spent 15 years there, with the last seven as its chief investment officer managing almost half of the firm’s $30 billion in assets.“He is in a league of his own as a stock picker and portfolio manager,” his former boss Andreas Halvorsen wrote to investors when Sundheim left Viking to start D1.

‘Reach for a Bucket’

Investors and peers say Sundheim’s particular talent is predicting how a company might do five or 10 years out, a time frame that most managers struggle to gauge. They point to his early bets on Mastercard Inc. and Facebook at inflection points when their futures looked murky. Friends have long joked Sundheim’s secret weapon is a Ouija board.

Once Sundheim settles on a company, he’s not afraid to take a big position. In a letter announcing the formation of D1, he quoted Warren Buffett: “When it’s raining gold, reach for a bucket, not a thimble.”While his public stock portfolio has a significant overlap with Viking -- anywhere from 33% to 64% a quarter since he started -- Sundheim tends to swing harder, according to a review of publicly available data by Novus, which analyzes portfolios for money managers and investors across all asset classes.

Novus data show his long portfolio has had a similar level of overlap with a few other managers: Gabe Plotkin’s Melvin Capital Management, Philippe Laffont’s Coatue Management and Chase Coleman’s Tiger Global Management. Yet Plotkin, another up-and-coming hedge fund manager, is still down almost 50% in the wake of January’s short squeeze. Sundheim was down 3% in the first quarter.

Sundheim’s rebound coincides with a growing roster of bets on private companies. The hedge fund’s exposure to such companies initially accounted for about a third of its assets and is now closer to half. He typically focuses on those that he thinks will go public within five years.

A few of these private investments haven’t performed as well as hoped, mostly because Sundheim failed to spot regulatory or legal snares. In 2019, Juul Labs, the e-cigarette company popular with students, cut into fund performance by as much as 10 percentage points after teen vaping came under scrutiny with regulators. The investment has still made money for the firm, according to a person familiar with the portfolio.

His $200 million stake in Robinhood Markets faces an uncertain outcome as the venture strives for a listing this year. Its popular trading app drew scrutiny from politicians and regulators after limiting bets on so-called meme stocks that included GameStop, and authorities in Massachusetts are suing over what they call its “gamification” of investing.

Sundheim attended high school in Toms River, New Jersey, before earning a degree from the University of Pennsylvania, according to his LinkedIn profile. He started his hedge fund career in 2002 when he joined Viking as a financial services analyst. He eventually moved on to other sectors and eight years later, Halvorsen named him co-chief investment officer and later sole CIO.In his early years, Sundheim made a hit with Mastercard, building a position worth about $2 billion soon after the company’s IPO in May 2006. The credit card company massively beat analyst estimates in the first full quarter it was public, and the shares more than doubled in the second half of that year. Likewise he bought into Facebook in the second half of 2013, when the company was struggling to get mobile advertising going. In the six months he built up his position, the shares climbed 120%. In both cases, he was never a static investor, trading in and out of the companies over the next several years.In 2017, he decided to leave Viking because he wanted to focus more on private companies. He put in more than $500 million of his own money, including some private investments he had made after he left his former employer. He initially capped the firm at $4 billion, raising some cash from Viking investors. He benefited as Halvorsen returned $8 billion to clients around that time and as competitors, like Tiger Global’s hedge fund, remained closed to new investments.While clients and friends describe Sundheim as low-key and down to earth, he’s started to attract attention as his personal fortune grows. He recently bought a house near Miami where he’s since moved, joining a few younger hedge fund managers who have decamped from Manhattan to Florida. Still, he’s keeping his headquarters in New York.

An avid art collector, he owns works by Andy Warhol, Jean-Michel Basquiat and Willem de Kooning in a collection valued at about $300 million as of a year ago. He and Plotkin both bought stakes in the Charlotte Hornets basketball team from Michael Jordan in 2019.

The real test for Sundheim will be if he can continue to produce top returns as assets grow, especially if there is rotation out of the technology-centered stocks he likes, or a pause in the rocketing IPO market that has helped his private companies.

“We are optimistic about the potential for strong returns in the portfolio, and the D1 team is executing at a high level,” he wrote in an April letter to clients.