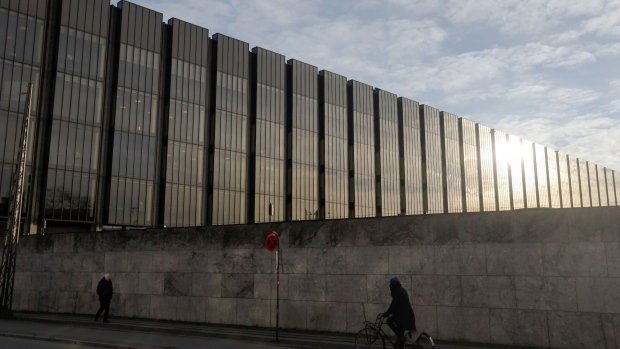 A cyclist passes Denmark's central bank, also know as Danmarks Nationalbank, in Copenhagen, Denmark, on Thursday, Jan. 3, 2019. For the first time in almost three years, the central bank of Denmark has bought kroner to support its euro peg through a direct intervention in the currency market. , Bloomberg

Denmark’s central bank bought kroner for a second month in a row to prop up the currency and support its peg to the euro.

The Copenhagen-based bank said Tuesday it sold 1.2 billion kroner ($180 million) worth of foreign currency in so-called interventions last month. Reserves fell by 1.9 billion kroner to 440.7 billion kroner at the end of November.

The krone has been trading on the weak side of parity since September, when the European Central Bank cut its benchmark rate.

The amount that Denmark has spent on interventions remains “limited,” Jan Storup Nielsen, an economist at Nordea, said in a note. “Against this background, we do not see this as an early warning of an independent Danish rate hike.”

Denmark’s central bank has an agreement with the European Central Bank to keep the krone within a 2.25% band around a rate of 7.46038 per euro, although in practice it sticks to a much tighter range. It last lowered its main rate in September, bringing it to minus 0.75%.

To contact the reporter on this story: Nick Rigillo in Copenhagen at nrigillo@bloomberg.net

To contact the editor responsible for this story: Christian Wienberg at cwienberg@bloomberg.net