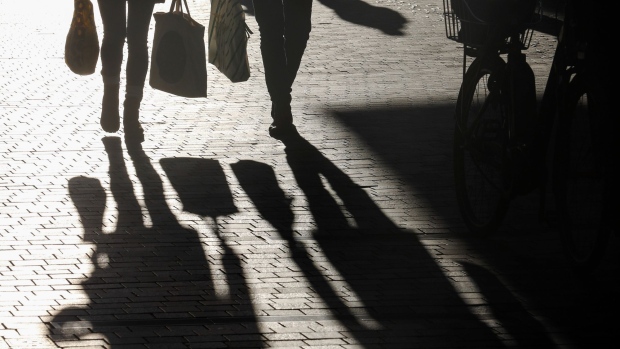 Shoppers cast shadows as they walk through the Kobmagergade pedestrianized shopping street in Copenhagen, Denmark, on Thursday, Jan. 3, 2019. For the first time in almost three years, the central bank of Denmark has bought kroner to support its euro peg through a direct intervention in the currency market. Photographer: Luke MacGregor/Bloomberg , Bloomberg

(Bloomberg) -- Denmark’s economy grew faster than expected in the second quarter as a strong labor market helped the Nordic country avoid a recession.

Gross domestic product probably expanded 0.7% from the first three months of the year, according to an indicator published by Statistics Denmark on Monday. GDP contracted 0.5% in the first quarter of 2022.

The data paints a better picture of the Danish economy after concerns have been building that its relatively good run during the pandemic may be over due to effects of higher energy costs and rising interest rates.

The second-quarter growth rate was “higher than expected and significantly better that the GDP contraction indicated by the Danish central bank’s model,” Las Olsen, chief economist at Danske Bank, said in a note. “We’re seeing significant improvement in industrial production and also better times in many service professions.”

Almost all sectors grew, helped by a strong labor market, as the employment indicator rose 0.7%, the statistics agency said. It highlighted hotels and restaurants where the end of Covid-19 lockdowns raised activity from the previous quarter. Denmark dropped all restrictions in February, declaring the disease no longer poses a threat to society.

Denmark probably faces a general election in the coming months as one of the Social Democrat government’s allies in parliament is pressuring Prime Minister Mette Frederiksen to call an early vote. Recent polls have suggested a majority for the center-right opposition.

Olsen at Danske said Danish companies are facing challenges that will lower output in coming quarters.

“Many businesses have massive problems with shortages in materials and labor,” the economist said. “The companies could probably have sold even more, but it’s hard for them to make their products.”