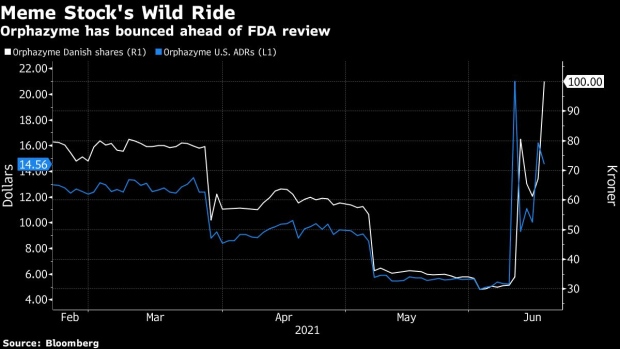 A set of vials sit in a laboratory at the Novo Nordisk A/S research and development campus in Malov, Denmark, on Friday, Aug. 31, 2018. Photographer: Carsten Snejbjerg/Bloomberg , Bloomberg

(Bloomberg) -- Orphazyme A/S, a small Danish biotech firm that morphed into a meme stock last week, said it failed to get a clear stamp of approval from U.S. authorities for its only viable treatment, forcing it to cut its full-year outlook.

This is “game-over” for all those speculating that Orphazyme might soar on sudden regulatory approval, said Per Hansen, an investment economist at retail broker Nordnet. It’s been a period of “high-stakes gambling” and even if U.S. authorities gave their approval, “it wouldn’t at all justify” the recent gains in the stock, he said.

The news comes after Orphazyme’s American depositary shares plunged in the U.S. late on Thursday, triggering a trading halt. In a statement on Friday morning, the Copenhagen-based company said it is “disheartened” by the Food and Drug Administration’s decision to seek further information before clearing its treatment for Niemann-Pick disease type C.

“We remain committed to working with the regulators” to win approval for arimoclomol, Chief Executive Officer Christophe Bourdon said. Orphazyme is still hoping for European regulatory clearance, which may come in the fourth quarter, he said.

But the news will have a “significant” impact on Orphazyme’s finances, the CEO acknowledged. The company now expects a much deeper loss this year, as much as 700 million kroner ($112 million) compared with as little as 100 million kroner before the FDA’s decision was known. And it only expects to have about 50 million kroner in cash by the end of 2021, one seventh its previous forecast.

“In the short-term, we will need to reduce our costs substantially and freeze all company efforts” that aren’t related to getting its one treatment approved, the company said.

Just one week ago, Orphazyme was embraced by investors on social media platforms such as Reddit, helping drive its shares almost 1,400% higher at one point during U.S. trading. Since then, the stock has tested the extremes of volatility, and the company itself has warned investors against being sucked into the frenzy.

“The situation is hopeless,” Hansen at Nordnet said. The company has already failed to win approval on two previous occasions, “and now the FDA is providing the coup de grace.”