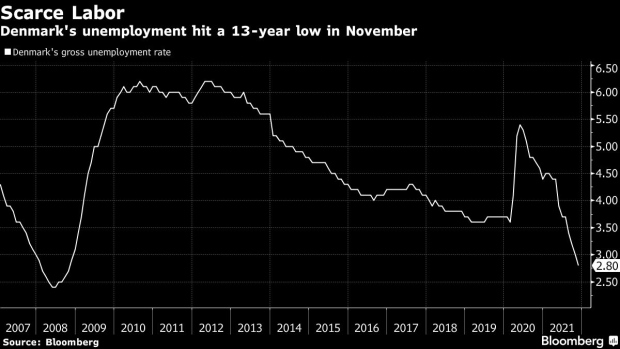 Prime Minister Mette Frederiksen’s Social Democrats clinched a deal with smaller parties to cut jobless benefits for fresh graduates and boost incentives for seniors to remain in the workforce, the finance ministry said in a statement late Friday.

The Nordic country’s economy, now clearly above its pre-crisis peak, has weathered the pandemic as one of the best among wealthy nations. Yet concerns of overheating are growing as Denmark’s gross unemployment rate fell to a 13-year-low of 2.8% in November and new vacancies are at record high.

An increasing number of Danish businesses are reporting that labor shortages are limiting production, Swedbank said this week. It also cited a risk that wage growth could exceed its forecast of 3% this year, eroding competitiveness.

The parties also agreed to temporarily set a lower floor to wages for foreign workers to help address labor scarcity in next two years. To get a job as an international recruit from July, a person’s annual wage has to be at least 375,000 kroner ($57,100) compared with 448,000 kroner minimum requirement so far.