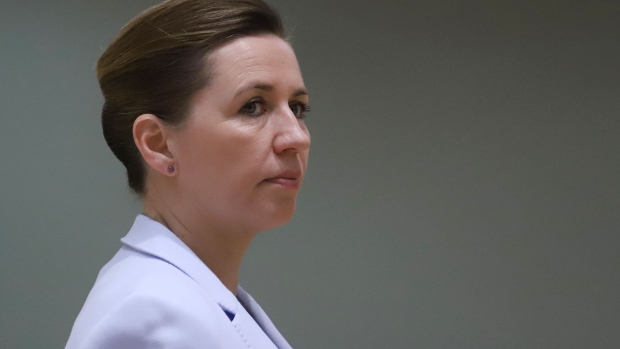 Mette Frederiksen, Denmark's prime minister, at a European Union leaders summit to discuss security and defense at the European Union (EU) Council headquarters in Brussels, Belgium, on Friday, March 25, 2022. The U.S. and the European Union will push to boost supplies of liquefied natural gas to European countries by the end of 2022 in a bid to displace Russian gas, a political framework that now leaves companies to sort out the details. , Bloomberg

(Bloomberg) -- Denmark’s prime minister, Mette Frederiksen, is approaching a deadline set by an ally in parliament to call a general election as the Nordic country’s assembly reconvenes after the summer break.

Frederiksen, who leads a Social Democrat minority government, had faced a deadline of Tuesday to announce a vote, until the Social Liberals gave her an extra day. She didn’t call elections in her speech at the opening of parliament and if she chooses not to act on Wednesday, she would still have until Thursday before facing a vote of no confidence.

The prime minister is being pushed into an election campaign eight months before a constitutional deadline, due to a 2020 scandal concerning the culling of the country’s entire 17-million mink population. In July, Frederiksen received a reprimand for her role and has since then slid in polls. An investigation found that her government, concerned that Covid-19 could mutate and transmit between the furry animals and humans, acted too fast when it gave the cull order without a legal framework in place.

Most opinion polls indicate that Frederiksen and her allies in parliament are trailing the opposition group, which is led by the Liberals and the Conservatives. Even so, the vote is likely to be close, given the difference between the two sides is within the surveys’ margins of error.

According to a September poll, voters expect health policy, the economy and the environment to dominate the campaigns. Recently, national security may have increased in importance after the sabotage of the undersea Nord Stream gas pipelines occurred in part in the Danish exclusive economic zone in the Baltic Sea.

“No matter what government has the responsibility after an election, there will be difficult decisions to make,” the prime minister told lawmakers in her speech Tuesday. The four big challenges she outlined for the incoming cabinet -- economic headwinds, spending on welfare, climate change and security -- aligned with voters’ preferences.

(Updates with prime minister’s speech in second and last paragraphs)