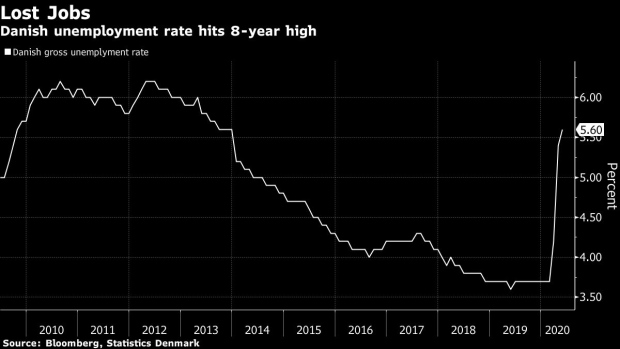 A pedestrian walks past closed stores on Storget street in Copenhagen, Denmark, on Wednesday, April 15, 2020. Danish Prime Minister Mette Frederiksen says her government's efforts to fight Covid-19 have been so successful that the country may now be facing a broader rollback of its lockdown than originally planned. Photographer: Carsten Snejbjerg/Bloomberg , Bloomberg

(Bloomberg) -- Denmark’s May unemployment rate rose to the highest level since the end of 2012 as the coronavirus lockdown wiped out jobs across the Nordic economy.

The gross rate rose to 5.6% from 5.4% in April, Statistics Denmark said in a statement on Tuesday.

The Copenhagen-based agency also said the Danish economy contracted 2% compared with the last three months of 2019, less than previously calculated.

The agency revised its latest estimate of a drop of 2.1%. Measured against the first quarter of last year, GDP fell 0.2% compared with a previously reported 0.3% decline.